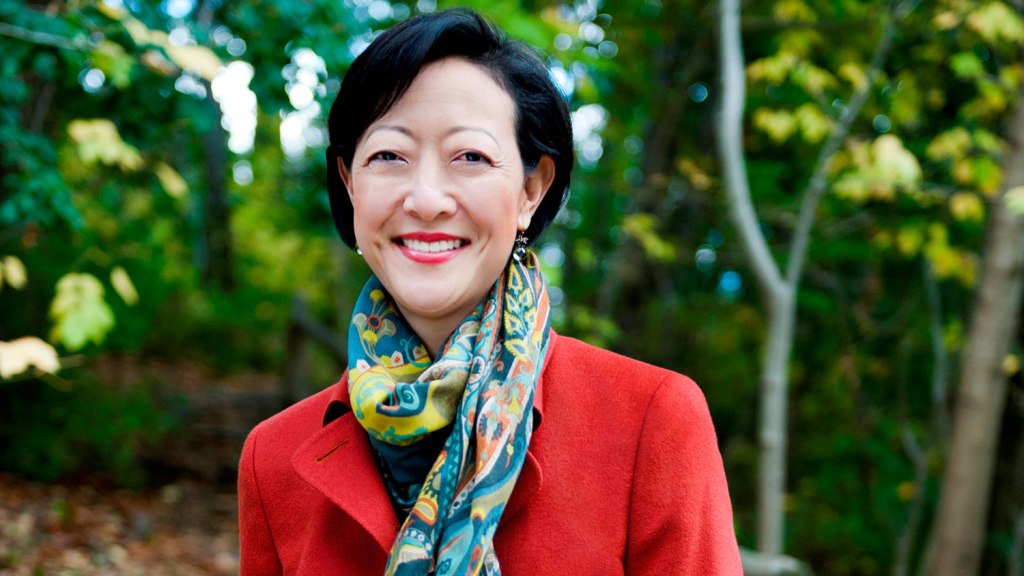 In my end-of-year environmental justice roundup, scholar Robert Bullard said that large-scale environmental organizations need to declare 2015 the “year of diversity.” Some of those organizations are already working toward that, aided by the brain trust of the Green 2.0 working group and the comprehensive research of the University of Michigan’s Dorceta Taylor.

One sign that times are changing: On Jan. 1, the Natural Resources Defense Council, one of the larger green groups in the nation, welcomed Rhea Suh as its new president. The daughter of Korean immigrants, Suh is among the first non-whites, and one of only a small handful of women, to serve as chief executive of a mainstream environmental group in the U.S.

With her new leadership position, Suh has rounded the bases of the environmental field. She began her career in philanthropy, working at the David and Lucile Packard Foundation, where she managed a clean energy and conservation program for Western states, and the William and Flora Hewlett Foundation, where she launched a program focused on environmental issues for underserved populations. Her most recent job was in government, where she was the assistant secretary for policy, management, and budget for the U.S. Department of the Interior.

Suh laid out her presidential priorities for the coming year in a Dec. 31, 2014 blog post on NRDC’s website. Among them was “delivering results” on tackling climate change and changing the color and reputation of green groups from that of mostly white-male-led outfits. “We will help broaden the environmental movement and ensure it reflects the great diversity of our nation,” wrote Suh. “We will continue working for equal justice under the law and welcoming more voices into the call for environmental protection.”

Many similar pledges have been made by green organization leaders before. But there are reasons to believe that Suh is not just spitting game. One of her chief tasks at Interior was to diversify the National Park Service. This was not a successful effort, as Suh admitted when speaking at a recent press conference hosted by Green 2.0 at the National Press Club in D.C. Still, this has not muddled her resolve on the idea that the environmental movement is only as strong as its diversity. “I’ll be damned if I leave the world for my daughter in the same place that I found it,” she said at the Green 2.0 presser. “I’ll be damned if I allow her, in 20 years, to walk into a ballroom, and she feels like she doesn’t belong there.”

Many people have been chipping away at this diversity issue for decades and with little progress, though. What will Suh do differently at NRDC to achieve the goals on this front? I was fortunate to speak with her after the Green 2.0 press conference to dig a little deeper at this question.

Q. So, about the National Park Service and its poor showing with diversity. I’ve written a lot about this, asking whether the issue is about just bringing inner-city kids to the outdoors, or if there is a structural, systemic racial prejudice that’s not being addressed.

A. I think it’s both, and not only for the Park Service, but also for the big environmental organizations. There is a need to ensure that the programs that we’re creating and delivering are programs that are relevant and pertain to the lives of all Americans. At NRDC, it’s how do we show we’re fighting battles for equity and justice at all levels. But more than that, I think organizations like the Park Service have a hard time looking outside of their ranks, and whether you label that as institutional racism or subconscious bias, the reality is these organizations are regenerating themselves. It’s very hard to go outside of the people who you know and are related to.

I didn’t grow up with [NRDC]. I wasn’t of the culture of the organization. I have different sector experiences. But [NRDC] said, “We want somebody with different perspectives to come in here because we think that’s going to make our organization stronger.” You don’t see that happening in a lot of organizations, particularly in senior-level positions. That is pushing it. That’s taking a risk. That’s taking a leap of faith. Again, this is about a long-term strategy of how we actually win, and organizations have to take more of those risks to get there.

Q. A common response from green groups as to why they don’t have more people of color on staff is because there aren’t enough of those people interested in these jobs. Have you found this to be true in your experiences?

A. I’ve heard that for 25 years, and I think it’s complete bunk. I recognize that many organizations just don’t know where to start. So there are some basic things, like, [finding] the best practices of an organization of a similar size and what they’ve done to try to target diverse populations. And part of it is just people who haven’t had the experience of looking at populations outside of their own. But I absolutely push back on this belief that we’re not going to find talent out there. I think that’s ridiculous.

Q. Organizations also say that they are under pressure by foundations to produce deliverables on other issues in specific time periods, and so they don’t have the resources or bandwidth left over to build out the kind of disciplined process for diversity that you mention. How do you respond to that?

A. I think it’s enormously short-sighted. The environmental community is strapped. There are more challenges on every front than we’ve ever seen. Yet, at the same time, we’re increasingly feeling like we’re winning battles, but we’re not winning the war. And in order to win the war, we’re going to have to amass the army that’s going to be able to do that. And unless we take the time and are disciplined around creating that army, we’re not going to ultimately achieve the end-outcome goal that investors want to achieve.

Q. How does diversity help green organizations navigate the political and legislative battlefield, where currently there’s so much polarization and stagnation?

A. I think in the short term, as we’ve heard from many congressional leaders, there’s an agenda that’s being put together — and will likely be executed — for a pretty stark environmental agenda. We’re going to see attacks on a lot of different fronts, on everything from trying to derail the carbon standards process to the Senate debating limiting the scope of the Clean Water Act. We’re going to see threats to the Endangered Species Act. I think as a movement, or even as individual organizations, as we try to confront these attacks on poor environmental regulations, we need to ensure we’re speaking with the voice of lots of communities about why these things matter.

These aren’t some kind of esoteric things that just exist within the sphere of Washington, D.C. These are regulations that directly affect the lives of millions of Americans, and I think that many people get that. The environmental organizations need to do a lot to make sure that folks are reminded of that connection, [and] so that Congress is reminded of that connection. Bringing a diverse spectrum of voices to those challenges will be a No. 1 priority for certainly NRDC, and, I think, for all environmental organizations.

Q. Diversity is often spoken of in moral terms or as a values issue, but does it also matter on a quantitative, economic scale as well, especially for nonprofits?

A. I’m struck by two separate but related stories about why diversity matters. There’s a very famous building at MIT. It used to be called Building 20. It was a totally weird building, very badly designed. There weren’t any stairs, and they put a bunch of different departments together. [As a result] they ended up commingling a ton of different disciplines, and that building was responsible for more Nobel prizes, more patents, more innovations [than any other building] in MIT’s history, because people bumped into each other, people had conversations, and people challenged each other with their different perspectives.

Another story is about Steve Jobs’ obsession with creating the Apple campus in Silicon Valley, and how he was so incredibly micromanaging. How he looked at architecture was [based on] how people [could] collaborate with each other outside of their own [silos]. It almost got to the point where he [wanted] only one bathroom for 500 [staffers], and everybody would have to come through this single corridor to go to the bathroom, just so [staffers] would have to bump into other people. It was just a principle that said, you’re not going to be an innovator unless you think outside of your own box. And I just think it’s a fabulous analogy for why diversity matters.

I think, frankly, the [environmental] movement is really vulnerable for being too insular. Diversity is not simply just reflecting demographics. Diversity is really about content, it’s about substance, it’s about what we do, why we do it, and how we pursue it.

Q. Environmental justice scholar Robert Bullard recently pointed out that diversity is also about funding, making sure that funding isn’t just being concentrated on big green groups, but also with groups on the ground. How do you feel about that, as someone who’s worked in the grant-making field?

A. I think there’s a lot of challenges in the environmental funding space, period. First, when you look at all the different categories that are funded through foundations, [the environment] is a very, very small percentage of the whole pot of philanthropic activity. And then, within the environment, you get another very, very small sliver that’s just directed toward communities of color and environmental justice issues. I think it is both the responsibility of foundations — which have, in some ways, the luxury of thinking about trends, perspectives, and opportunities — to think about where they’re going to get long-term gains and significant opportunities [from community-based organizations].

It’s also the responsibility of big organizations like NRDC to say, “We’re not going to be able to get everything we want to get done on our own, and we have to have partnerships.” We’re not going to be the experts in this local community — and nor should we ever be the experts in this local community — so we need to support the local community experts, because they’re the boots on the ground and they know what’s happening. It’s not simply [having them] show up at our rally, it’s supporting these organizations for their own missions, which are wholly complementary to the missions and objectives that NRDC wants to pursue.