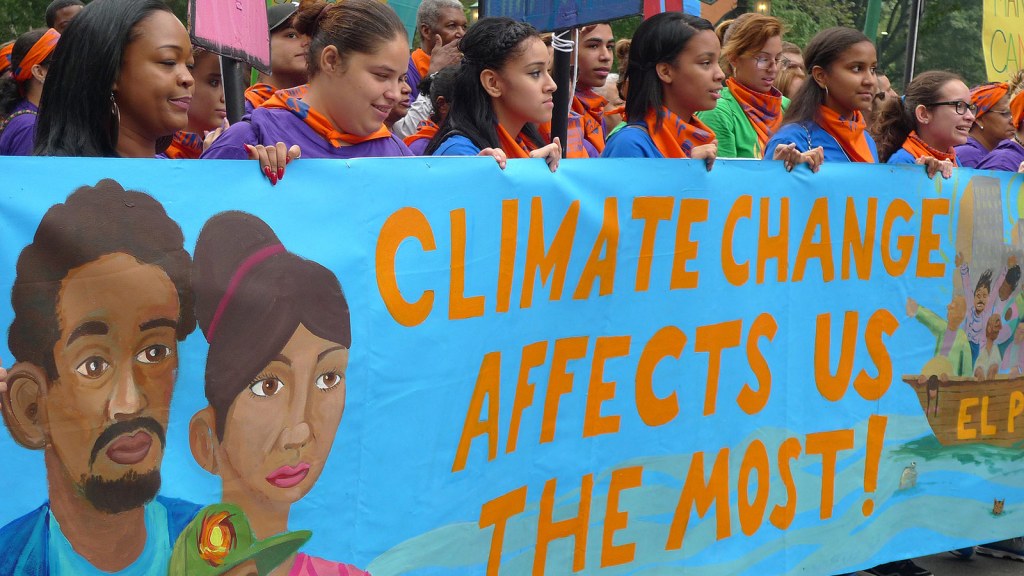 A key scene in Ava DuVernay’s triumphant Selma shows Martin Luther King explaining to President Lyndon B. Johnson why African Americans in the South can’t wait much longer for a voting rights law. Johnson’s response: “You got one big issue, I got a hundred and one.” Put differently: Ain’t nobody got time for that civil rights stuff. African Americans, women, gay and queer Americans, and many other oppressed groups have heard this response for decades.

It’s no different in the environmental sphere, where the existing green world order says we must deal with melting polar caps, ocean acidification, rising sea levels, and dying polar bears — so that justice stuff will have to wait. This is what’s been told to black oystermen on the Gulf Coast who have been trying to recover since the 2010 BP oil disaster, as seen in Nailah Jefferson’s amazing documentary Vanishing Pearls (which DuVernay helped produce). It’s been said to African Americans in the town of Turkey Creek, Miss., by developers and elected officials who sought to wipe it off the map to build shopping strips and casinos, as seen in Leah Mahan’s Come Hell or High Water.

Together, these films remind us how much African Americans have had to sacrifice to help perfect this union called America, and also how far away we are from that goal. This year, we celebrated the 20th anniversary of President Clinton signing Executive Order 12898 on environmental justice, the 50th anniversary of President Johnson signing the Civil Rights Act, and the 50th anniversary of Freedom Summer. Continuing those struggles, over 400,000 people marched in New York City for climate justice. This was also the year that far too many black men — Michael Brown, Eric Garner, Tamir Rice, John Crawford III and, damn, just before Christmas, Antonio Martin — were all killed by police, and with little penalty for it. This is simply immoral and unsustainable.

Ask me how we did on environmental justice this year, and I can only say I feel like we are — to borrow from another DuVernay gem — in the “middle of nowhere.” What I think matters less, though, than the thoughts of those on the battlefield fighting for justice to take its rightful, central place in our lives. I reached out to some of those people to get their take on what progress environmental justice made in 2014, and where they’d like to see it go in the new year.

Jumping off the discussion was Robert Bullard, who is widely considered the grand patriarch of the EJ movement and who was honored by the Sierra Club this year when the organization created an award in his name. Said Bullard:

“In February, the nation commemorated the 20th anniversary of the signing of the Environmental Justice Executive Order issued by President Bill Clinton. The executive order has yet to be fully implemented. Environmental justice leaders celebrated their victories in 2014, and quickly got back to work on the many challenges facing their constituents. My “Top 6” wish list for 2015 is pragmatic and doable with some elbow grease and determination:

1. The U.S. Green Groups need to declare 2015 the “year of diversity” followed by an aggressive action plan with numerical goals to address their lack of diversity. People of color comprise less than 16 percent of employees at environmental institutions.

2. The EJ movement would achieve a major victory in 2015 if the philanthropic community implemented the winning strategy put forth by the National Committee for Responsive Philanthropy 2012 report that recommended targeted funding at communities most impacted by environmental harms.

4. Implement the 20-Point Plan to Address Environmental Health Disparities developed in 2011 as part of a W.K. Kellogg Foundation-funded initiative.

5. Build strong coalitions to make sure that when states develop plans for reducing carbon emissions under section 111(d) of the Clean Air Act, those plans ensure equity for low-income communities of color.

6. We need President Obama and congressional Democrats to aggressively resist and stand firm against Republicans and their right-wing allies’ attempts to weaken the EPA, derail climate action planning, dismantle Obamacare, and roll back civil rights and worker rights.”

Next up was Leslie Fields, Sierra Club’s national environmental justice director, who has put in decades of work in helping grassroots organizations find justice for overburdened communities:

“2014 brought us the 50th anniversary of the Civil Rights Act and the 20th anniversary of the EO 12898. The promise and mandate of both laws were not fulfilled in terms of environmental justice. The Interagency Working Group on EJ needs to emphasize enforcement of [the Civil Rights Act’s] Title VI throughout all the agencies. With Executive Order 12898, all rules need to include an EJ analysis. EPA created an excellent EJ analysis with the Definition of Solid Waste rule and EPA should incorporate that analysis in every rule that is promulgated. The holy grail for EJ communities is a cumulative impacts standard. We will be working towards that standard in 2015 and beyond.”

As I wrote about back in May, Civil Rights Act enforcement has been one of EPA’s weakest links, but there’s little justice to find in environmental policy without it. Steven Fischbach, the longtime community lawyer for Rhode Island Legal Services, explains this well, especially in terms of how it relates to other environmental matters:

“The strength of the EJ movement still lies primarily at the local level. Grassroots activists can muster the battle to defeat specific projects, but have failed to score major victories on the national level. Keystone XL’s future looks a lot brighter since the GOP took the Senate, and while progress has been made on Chemical Security issues, there has been little, if any, progress on getting EPA to properly enforce Title VI of the Civil Rights Act.  Looks like the promise for 2015 lies in connecting EJ work to #blacklivesmatter, and kudos to [New York City Environmental Justice Alliance executive director] Eddie Bautista for his efforts to connect air pollution to high asthma rates in communities of color in the wake of Eric Garner’s death. “I Can’t Breathe” could become a way to connect EJ to the broader movement for racial justice, and bring a new generation of activists into EJ work.”

For Brent Newell, legal director of the Oakland, Calif.-based Center on Race, Poverty & the Environment, progress has as much to do with historic civil rights as it does with present-day policies around regulating greenhouse gases:

“During 2014, the intersection between climate change and environmental justice came to the forefront as Gina McCarthy advanced her most important rule and the centerpiece of President Obama’s climate policy: the Clean Power Plan. National progress on environmental justice in 2015 will ultimately be measured by what happens with the Clean Power Plan. Though EPA touted public health benefits in its media strategy, the proposed rule seeks to allow states to use pollution trading schemes like “cap and trade,” which allows power plants to avoid on-site pollution reductions by purchasing “offsets,” or pollution reductions from somewhere else (e.g. a tree planting operation in Brazil). EJ communities already suffer disproportionately from the effects of climate change, they should not also suffer from the impacts of climate policy. Whether environmental justice will progress at the national level in 2015 will depend on whether McCarthy will use her existing authority under the Clean Air Act and Civil Rights Act to protect communities. And also, whether the big green groups will change their positions by opposing cap and trade.”

Newell, Fields, Fischbach, and Bullard have long been entrenched in campaigns for EJ, and have the battle scars and medals to prove it. I’ve learned a lot from them and many more like them over the years. One highlight for me this year, however, was sharing the stage in October at SXSW Eco with young advocates representing the future of the movement. I reached out to a few of them to gather their reflections. Said Tony G. Reames, a postdoctoral research fellow at the University of Michigan’s School of Natural Resources & Environment:

“As an alumnus of [the historically black college/university or HBCU] North Carolina A&T, I was inspired to learn that an assembly of HBCU students were among the estimated 400,000 who participated in the 2014 People’s Climate March. Climate change is an environmental justice issue, with disproportionate environmental and social impacts on the areas where many HBCUs are located and the populations these institutions serve. In 2015, I look forward to increased dialogue between policymakers, academics, corporate interests, and communities, and meaningful action on the inherent inequalities in climate change mitigation and adaption.”

“Across the nation, millennials are mobilizing and holding the institutions that are failing us accountable. Conversations that began online through hashtags have grown into movements that are beginning to shift policy. As the environmental movement continues to attempt to sell the nation on preserving our planet, black millennials are echoing #BlackLivesMatter across the world. If there was ever was a more perfect time for environmental justice it’s now. How do we create resilient communities that value black life? Unlike Sway, our environmental justice leaders got the answers.”

You probably noticed that many of these people are emphasizing the connection of their environmental work with the Black Lives Matter protests. It is an important connection to make, indeed. Environmental advocate Judy Hatcher, president of the Pesticide Action Network, has pushed her organization into bravely taking a stance on this. Despite criticism from some of PAN’s members for this, Hatcher has remained optimistic:

“I’m excited about progress this year that may result in real changes for America’s farmworkers. The EPA is finally taking steps to revise the Worker Protection Standard, and the Equitable Food Initiative and other certification programs got real traction in 2014. I’m heartened to see the types of folks who come together around the Black Urban Gardeners, the Detroit Black Food Security Network and similar groups. And on the crisis/opportunity front, seeing so many ‘green’ allies searching for real ways to stand in solidarity with the #blacklivesmatters movement meant a lot to me personally, as an African American.”

Few have had their finger on the pulse of progress like Jalonne L. White-Newsome, federal policy analyst for WE ACT for Environmental Justice, who said:

“Justice in 2015 starts with accountability. Accountability within our federal agencies and accountability in the broader community. The intentional, thoughtful, and permanent inclusion of environmental justice in all federal rule-making processes — from concept to implementation — is my wish for 2015. But we also need to hold ourselves accountable — the faith, social justice, and the environmental justice community. It’s time to leave our egos behind and truly come together with a united voice, under a united agenda.”

Also Nikki Silvestri, the former executive director of Green For All:

“In 2014, environmental justice showed signs of being more fully integrated into larger discussions of the environment. The National Climate Assessment’s section on indigenous communities was comprehensive and devastating. There was also attention given in the rest of the report to the disproportionate impact of climate destabilization on people of color. The largest climate demonstration in the world, the People’s Climate March, held environmental justice and indigenous communities issues at the center. The new challenge in front of us, in 2015, will be the integration of environmental justice with other immediate forms of justice. As Naomi Klein so eloquently put it, #blacklivesmatter when it comes to police brutality AND climate change.”

There’s a lot of optimism and wisdom shared in these responses, all of which we will need as we head into congressional terms led by lawmakers with avowed hostilities toward anything environmental or justice-related. Which is why I’m thankful for all who stood up, died-in, and marched forward for safer, cleaner communities for all of us, from Selma to Ferguson and beyond.