With so much going on in the world right now (pandemic! protest! hurricane season!), it can be easy to forget about something as banal as board games. But obsessively checking Twitter 24/7 can burn out even the most ardent activist, and there’s some evidence board games can help with depression and keep you mentally sharp.

If you’re an eco-conscious gamer, you can entertain both your passions with one of the many planet-themed board games currently on the market. At Grist, we dug up some of the best options and tried them out to see if they’re worth playing. In these games, you can battle fellow trees for light in a forest or design the New York of the future. They range from simple art games to encyclopedic simulators. They’re no Candyland, but they might teach you a thing or two about climate change, city planning, and the future of agriculture.

Catan’s Crop Trust expansion adds an environmental twist to the classic European strategy game. In this spin-off, players store seeds and manage crops to withstand the natural hazards that come with growth. Watch our video to learn more.

Would you play it again? We already are, whether we like it or not 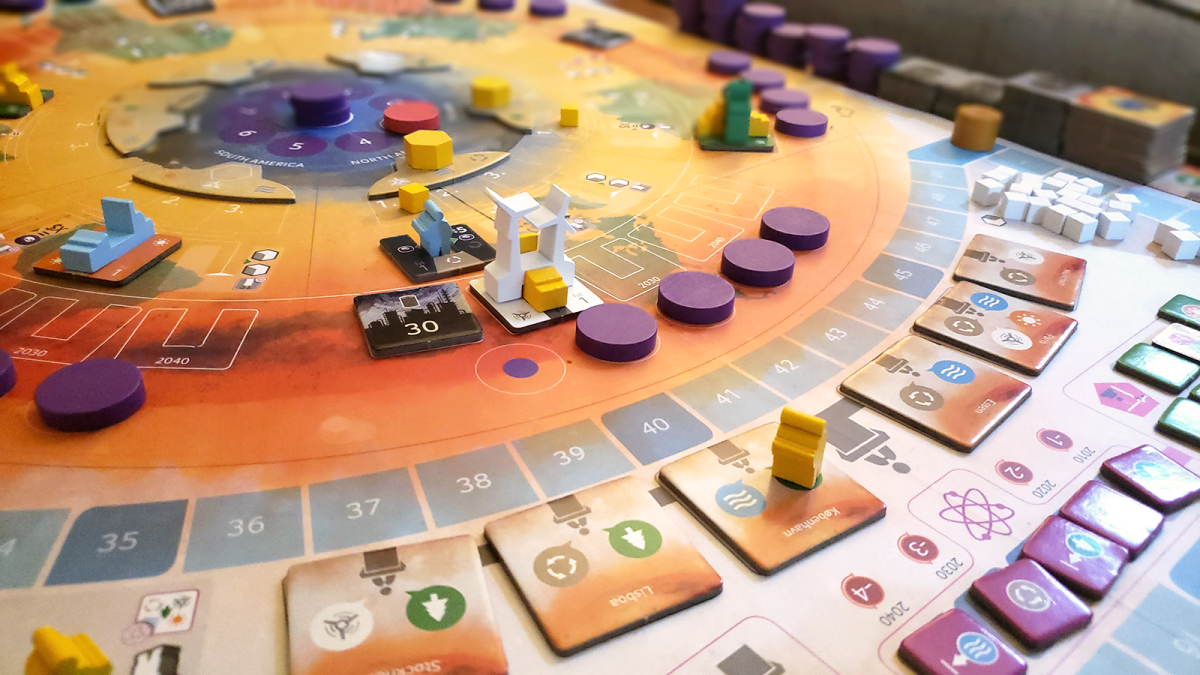 When I was in grad school, my program ran a multi-day simulation of the Paris Climate Conference — complete with fractious negotiating parties, industry shills, and self-interested advocacy groups. The following year, in 2015, I found myself reporting at the real event. Neither experience was as complicated as playing the board game CO2: Second Chance, which traces an effort to stave off climate change over multiple decades via energy summits, green electricity generation, United Nations lobbying, and carbon-market price manipulation. It took me 45 minutes to set up the board, 45 minutes to read the rulebook, and 30 minutes to mansplain the rules to my patient quarantine partner.

The difficulty of the game’s mechanics is not necessarily a bad thing — climate change is hard — though the learning curve may scare off younger (or bored) players. (The game’s publisher claims it is appropriate for ages 14 and up.) You can play a competitive or cooperative version of the game, and in both cases, players take on the role of renewable energy companies seeking to develop new projects, united by a desire to keep the atmospheric concentration of carbon dioxide below 500 parts per million — and, naturally, turn a profit. The game’s design is far from perfect: The emissions-pricing mechanism is a little clunky, for example. But broadly speaking, CO2: Second Chance does a good job of capturing climate change’s competing priorities. The first time we played, we flamed out in the first decade due to poor carbon market management. May we all have better luck. 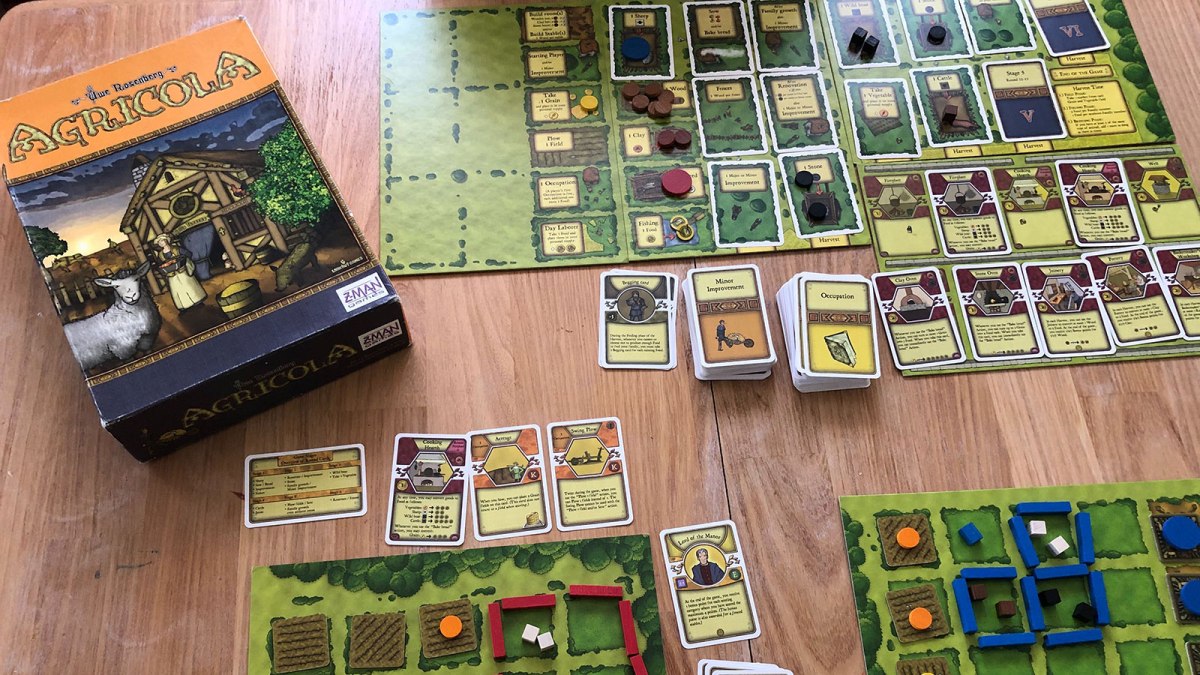 Like agriculture itself, Agricola is not exactly new. The original edition of the game was released in 2007 and the last update was 2016, which at this point feels like a lifetime ago. But even if you’ve played it dozens of times (which I have), it remains a fresh and pastoral addition to anyone’s board game closet.

The premise: Each player builds their own farm — think plowing fields, planting crops, building fences, and raising animals — earning victory points based on the contents of their end-scenes. It’s kind of like SimFarm but, you know, analog and German. You start out as a farming couple (two action pawns per player) but can choose to “reproduce” a few times starting about halfway through the game. Just like in real life, family expansion comes with a cost — you need to feed your pawns at the end of every harvest by sacrificing your hard-earned meat and/or veg.

The game is strategy-forward, meaning there are no dice and very little is left up to chance. If you don’t plan ahead, you could easily end up a few food tokens short at harvest time, a fate that will cost you precious victory points. As a result, players are constantly focused on food production, balancing the need to feed with longer-term actions such as updating and expanding your farmhouse, acquiring and fencing in livestock, and installing the latest cooking technology (yes, really).

While some strategies for success (Have kids as fast as you can! Eat a bunch of meat! Build a bigger house than your neighbors!) are decidedly not pro-climate, the game does an admirable job of reminding players that victory ultimately lies in balance between long- and short-term goals. If a future edition were ever to be set in modern times (judging from the rural peasant stock gracing the original box art, that would be leaping forward a few centuries), one could easily imagine the tiny homeowners weighing the merits of solar panels and heat pumps. But even in its medieval form, it’s an entertaining quasi-climate parable that’s well worth your time. 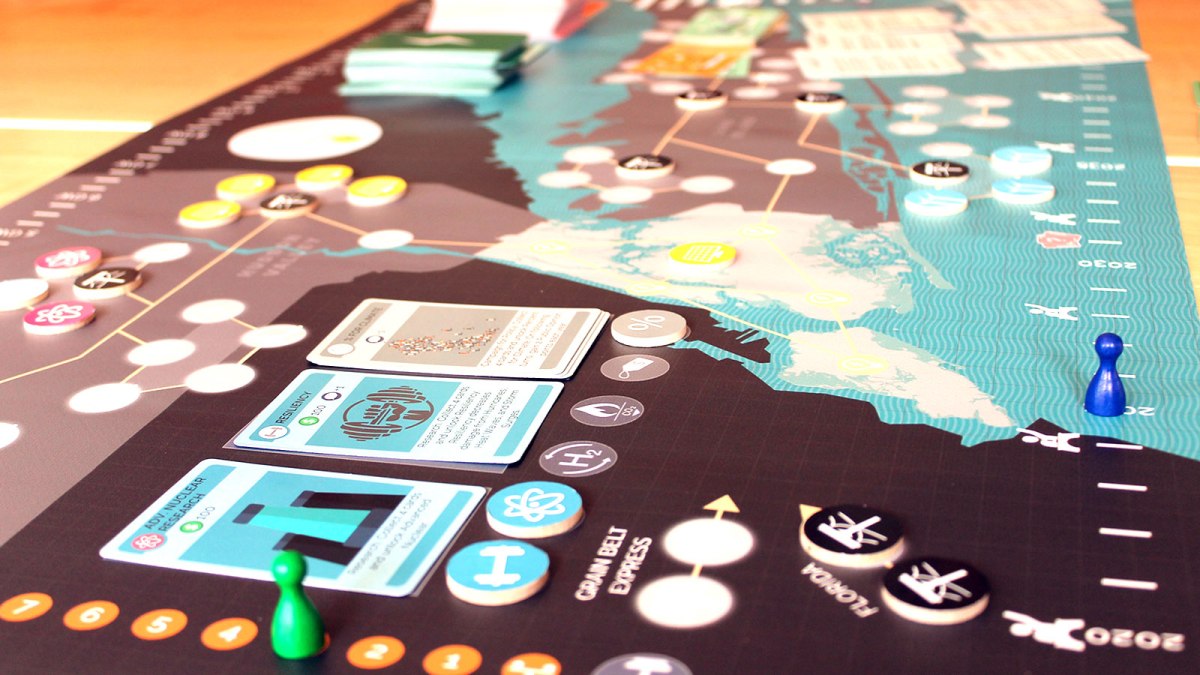 After years of writing about how to continue civilization without wrecking the world, I kept thinking that a game might be an easier way to help people weigh the thorny consequences that come with every strategic choice. So, the moment I heard that the nonprofit City Atlas was making a climate board game called Energetic, I wrote one of its founders, Richard Reiss, to beg for it.

In the game, players race against time to build enough clean electricity to power New York City. It’s a cooperative game, like a version of Pandemic where you are trying to squelch fossil fuels rather than an outbreak. Your team aims to build a supply of 16 gigawatts of clean energy before 2035 while also managing money, public opinion, and grid stability. Each player takes a role with special abilities. There’s a politician capable of swaying public sentiment, an engineer who can advance technological research, a money-generating entrepreneur, an activist, and a journalist.

If you are looking for a game that accurately simulates the trade-offs necessary for transforming the energy system, Energetic is at the top of its class. But if you are looking for addictive, finely honed game mechanics, well, as you’d expect, the professional game designers do a better job than climate activists. Still, it’s a joy if you play with the right people. I played the game with a group of climate wonks gathered around my dining room table, and you can read how it went here. 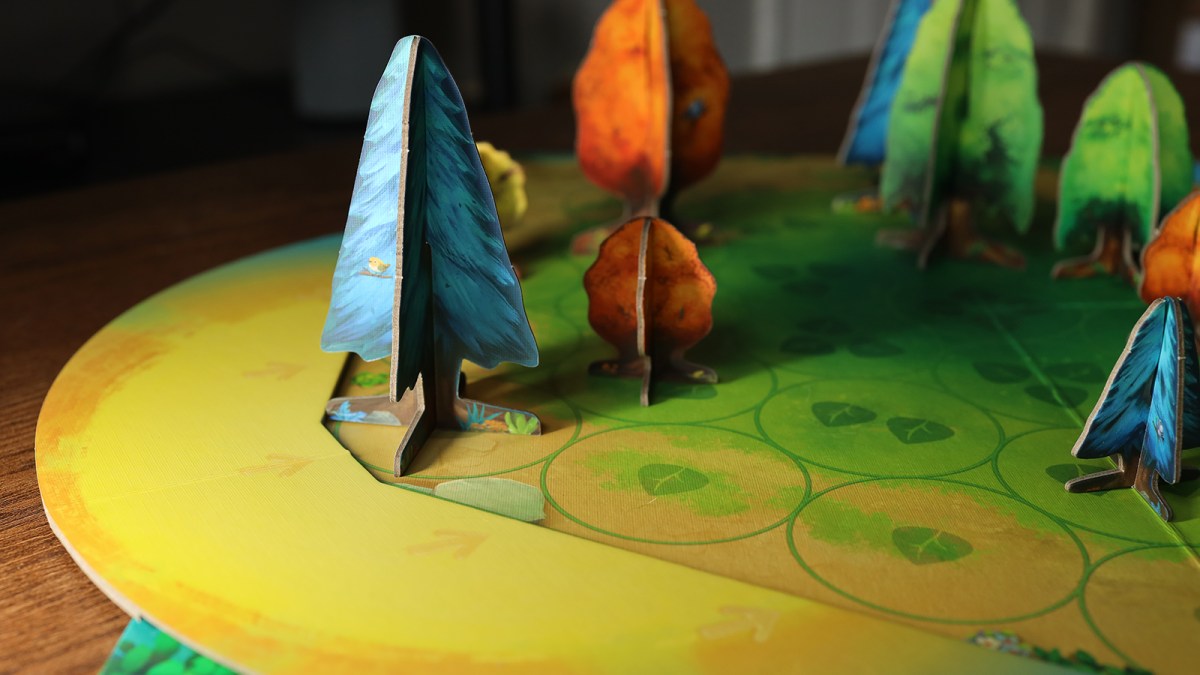 In every forest, there’s a constant battle for survival raging as trees compete for light. Photosynthesis turns that slow-motion battle into a 20-minute board game.

You play as a tree species trying to soak up sun and spread through a forest. Collect enough sunlight, and you can grow tall, plant new seedlings, and even shade out your neighbors. But every turn, the sun continues its rotation around the board, changing who’s in the light or the shade.

The game immerses you in the struggle of life in a forest. It’s beautifully illustrated, from the main pieces — the green, blue, yellow, and orange trees, fitted together with two slotted pieces of cardboard — to the tiny details, like the foxes, bugs, and mushrooms on the forest floor. The game also presents an interesting spatial challenge. It plays almost like a 3D puzzle: In order to win, you have to picture where your shadow will fall in every direction, and plant your seeds accordingly. If you’re looking for a combination of a puzzle, a strategy game, and a vivid piece of art, Photosynthesis is for you.