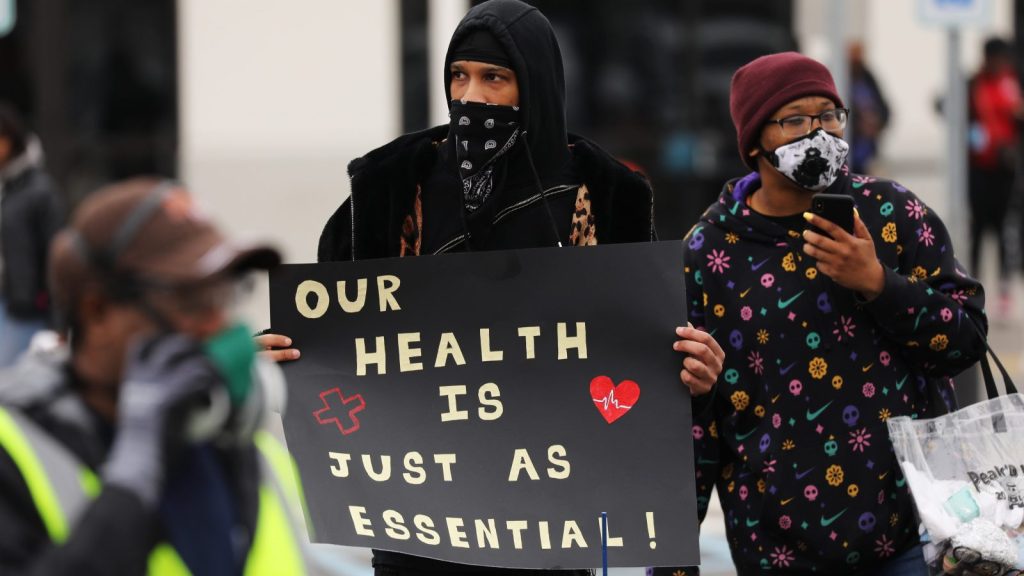 The country is grinding to a halt, but Amazon warehouses are still churning out packages at a breakneck pace. Amazon employees at 19 different facilities have been hit by the virus. Workers in fulfillment centers and warehouses have been asked to follow new safety protocols, but masks and other protective equipment are in short supply, and the cramped nature of many of those facilities don’t allow for effective social distancing.

Despite all this, the tech giant owned by the richest man on Earth is only offering paid sick leave to employees who have been put into quarantine or have tested positive for coronavirus. Amazon is in the process of hiring 100,000 new employees to keep up with a surge in demand from Americans ordering stuff from the confines of their homes. To raise awareness about unfair working conditions for the company’s frontline workers, Amazon warehouse employees are organizing strikes and protests. “How can we be essential workers when our lives are not essential?” an Amazon employee at a facility in Chicago said in a video on Monday.

This isn’t the first time Amazon has responded to a global crisis with measures its employees deem inadequate. A group of tech employees within the company came together last year to put pressure on Amazon leadership to adopt a more aggressive plan to reduce the company’s carbon footprint and end web service contracts with oil and gas companies. When Jeff Bezos unveiled a plan to reach the goals of the Paris climate agreement 10 years early, employees with the group, Amazon Employees for Climate Justice, publicly criticized the CEO for not being aggressive enough, risking their jobs in the process.

Article continues below
More in this series
Will COVID-19 give Santa Ana officials an excuse to ignore the city’s lead crisis?
Can the EPA reopen its offices safely? Its employees don’t think so.
Smoke and COVID-19 drove us inside — but the air in there wants to kill you
How California’s farmworkers are banding together to survive the pandemic

Now, some of those same employees are speaking out in support of the workers on strike. In a letter on Medium, the Amazon climate group drew parallels between the two global disasters. “This pandemic — like the climate crisis — stresses our society, its systems, and institutions. Both crises threaten everybody, but not equally,” the letter said.

“Climate Justice demands that we no longer view Earth and our fellow human beings as expendable resources to be exploited for the gain of a few,” said Maren Costa, a principal user experience designer at Amazon, in a separate statement.

1/ We are hearing horrifying stories from our coworkers in Amazon warehouses about their working conditions during the pandemic. Amazon is not taking adequate steps to protect its workers, and therefore the public, from #COVID19

The show of solidarity is a prime example of how the climate movement can uplift wider efforts to achieve justice for blue-collar Americans. Green groups have overlooked working-class people, especially minorities, in the past. That’s due in no small part to the fact that the environmentalism movement has historically had some racist strains. But lately, traditional green groups and justice organizations have been coming together more often to advocate for a more inclusive climate agenda. The momentum for a Green New Deal, an idea popularized by New York Representative Alexandria Ocasio-Cortez, is evidence of that progress (though even that initiative caused some friction between climate and labor advocates).

As of Wednesday afternoon, more than 5,000 Amazon corporate and tech workers had signed an open letter to Bezos calling for better protections for workers. They’re demanding paid sick leave regardless of COVID-19 diagnosis, childcare pay and subsidies for affected workers, hazard pay, and other measures. “While Amazon has made some limited coronavirus accommodations, it needs a comprehensive plan to ensure the safety of all of its workers and the larger public,” the letter said. Solidarity; you love to see it.