We recently told you about the new fossil fuel–loving senators who were just elected, but they’re not the ones who’ll be causing the most trouble. The more tenured senators who’ll assume the Senate’s leadership posts are the ones you really need to watch out for — and they’re just as prone to silly science denial as the freshmen.

Incoming Senate Majority Leader Mitch McConnell (Ky.) and the new Republican committee chairs will dictate what bills and amendments get considered, and will help set the public agenda by holding hearings, producing reports, and pumping out press releases.

Most of the outgoing Democratic committee chairs, with the notable exception of Energy Committee Chair Mary Landrieu of Louisiana, are climate hawks. Last week, four of them sent a letter to President Obama urging him to press forward on reducing carbon emissions and forging an international climate agreement. They have good reason to worry: Their Republican replacements will do everything in their power to force Obama to give up on regulating greenhouse gases.

Here’s what you need to know about the Republicans who are likely to be elected to leadership positions with the most influence over climate and energy policy: 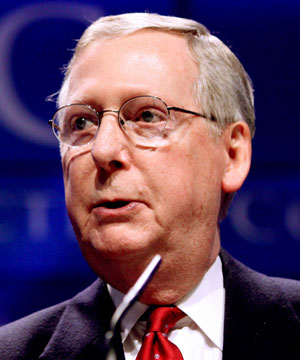 McConnell is setting the overarching strategy for Senate Republicans. Anyone leading that caucus is bound to be conservative, but McConnell is especially fond of fossil fuels and polluting corporations. He hails from Kentucky, a state with a lot of coal, and he is an avid believer in raking in corporate cash. As The Huffington Post notes, “Over three decades, McConnell has made it a top priority to disrupt and degrade campaign finance regulations … including challenging in court the 2002 McCain-Feingold law, the passage of which he once called the worst day in his political career.”

McConnell received more campaign money from coal companies than any other senator in this last election cycle, more than $200,000, and he was the fourth-largest recipient of oil and gas industry money, pulling in almost half a million dollars. In return, he gives his donors what they want. McConnell has made whining about Obama’s supposed “War on Coal” one of his main talking points. He sponsored the Senate bill that would prevent EPA from instituting its proposed regulations on CO2 from coal-fired power plants. He has suggested he might tie repealing those regs or approving the Keystone XL pipeline to essential but unrelated spending bills so that Obama must choose between signing them or shutting down the government.

McConnell tries to dodge questions about climate science, immediately changing the subject to his commitment to keeping the coal burning. Here are his two most recent comments when asked if he accepts climate science:

“There’s a bunch of scientists who feel this is a problem and that maybe we can do something about CO2 emissions. George Will, the columnist, wrote recently that back in ’70s a lot of scientists thought we were moving towards an ice age. … The job of the U.S. senator from Kentucky is to fight for coal jobs in our state.”

Coal mining currently employs less than 1 percent of Kentuckians — 11,885 in 2013, out of a population of 4.4 million. George Will’s talking points have, of course, been thoroughly discredited.

Lifetime voting score from the League of Conservation Voters: 7 percent 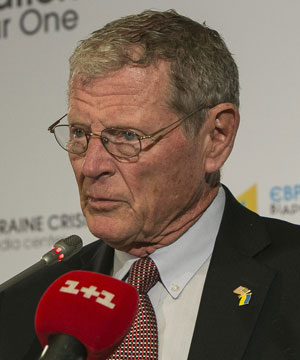 Likely chair of the Environment and Public Works Committee

In the GOP’s never-ending efforts to supply Jon Stewart with material, Inhofe, the Senate’s leading climate change denier, is in line to take over the committee with jurisdiction over federal environmental policy.

You can say this for Inhofe: Unlike many Republicans, he’s not afraid to discuss climate change. In 2006, Inhofe boasted, “I have spoken more about global warming than any other politician in Washington today.” Peddling climate malarkey is Inhofe’s obsession and his greatest claim to fame. He even wrote a book in 2012 called The Greatest Hoax: How the Global Warming Conspiracy Threatens Your Future. Not that Inhofe has anything original to say about climate science. He trots out all the same canards, like the “global cooling” meme, that his co-partisans do. A typical sentence from an Inhofe speech on the subject — “Climate alarmists have been attempting to erase the inconvenient Medieval Warm Period from the Earth’s climate history for at least a decade” — selects an obscure and misleading factoid, carefully dresses it in scientific language, then combines it with a dose of heavy-handed propagandistic rhetoric. Inhofe cites the Bible as another argument against climate change: “God’s still up there,” he said in a 2012 interview. “The arrogance of people to think that we, human beings, would be able to change what He is doing in the climate is to me outrageous.”

Far be it from us to suggest that Inhofe’s anti–climate science convictions have anything to do with the fact that Oklahoma is an oil- and gas-producing state, or that he is handsomely rewarded with campaign contributions from fossil fuel industries. But he did receive the fourth-most campaign donations from the coal industry of any senator, and the fifth-most from oil and gas. And like McConnell, he serves those industries’ interests. According to The New York Times, Inhofe “is expected to open investigations into the E.P.A., call for cuts in its funding and delay the [power plant] regulations as long as possible.” 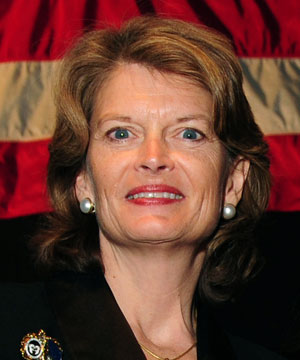 Likely chair of the Energy and Natural Resources Committee

This committee oversees oil and gas drilling on federal lands and in offshore areas, and federal energy policy like Department of Energy grants. Compared to most of the other future GOP Senate committee chairs, Murkowski is actually a relative moderate. She loves drilling for oil, of course, as all Alaska Republicans do. But she’s also, by her own description, from a state on the front lines of climate change, with a lot of avid hunters, hikers, and fishers, and a tourist industry that depends on Alaska’s natural beauty. Moreover, she’s somewhat at odds with the GOP base: She was defeated in the 2010 Republican primary by right-wing candidate Joe Miller but went on to beat him in the general election as a write-in candidate. So while she continues to caucus with the Republicans, she owes a few favors to the Democratic and independent voters who helped her win reelection.

While Murkowski is less anti-environment than most Republicans, she is certainly more so than any Democrat, even Landrieu. Murkowski laid out an energy plan last year that was all about ramping up domestic production of oil and gas. As The Washington Times notes, “Murkowski calls for faster permitting and environmental reviews of new projects and expanded drilling on federal lands and waters. Her plan would also forgo federal regulations on hydraulic fracturing in favor of state regulatory programs.” She also wants to end all renewable energy subsidies by 2020. She pushes for Keystone approval, having sent a letter to the Obama administration requesting it. She supports drilling in Alaska’s Arctic National Wildlife Refuge. Earlier this year, she called for the Commerce Department to lift the ban on crude oil exports.

Murkowski isn’t a climate change denier, but her actions don’t differ much from one. As Kate Sheppard reported in Mother Jones in 2010, “Murkowski hasn’t joined any of the current congressional efforts to curb carbon pollution. Instead, she’s gone on the offensive against the White House’s signature environmental initiatives. She has launched an assault on the Environmental Protection Agency’s authority to regulate carbon dioxide. Murkowski has also made it plain that the price for her vote on any climate bill is a lengthy list of handouts for the oil and gas industries.” 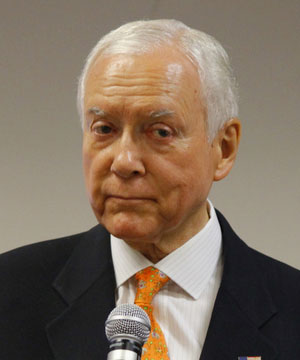 Likely chair of the Finance Committee

The Finance Committee writes tax laws. Those include massive subsidies for oil and gas in the form of tax loopholes, and for renewables like the (currently expired) wind energy production tax credit. Since a bill creating a carbon tax or cap-and-trade system would be largely a piece of tax legislation, the Finance Committee would share authority over it. Not that any such bill will come out of Hatch’s committee, mind you. Here’s Hatch speaking at a September committee hearing on energy taxation:

Proponents of a cap-and-trade approach have, for the most part, acknowledged that this proposal is dead. However, instead of admitting failure and moving on, they are repackaging cap-and-trade by calling it a carbon tax.

I’m no marketing expert, but if you couldn’t sell the American people on a bad idea, adding the word tax to it is not going to make it look any more appealing.

Raising the price of electricity, natural gas, and gasoline does not sound like a good idea to most hard-working, middle-class Americans. Yet, that’s precisely what a carbon tax would do.

My view on this is simple: If you really want to pursue a policy that ships jobs overseas, enact a carbon tax.

Hatch doesn’t accept climate science, and he didn’t even accept it back in 2009, when more Republicans did. In a 2009 letter to a constituent published in the The Salt Lake Tribune, Hatch wrote, “I have serious concerns with any legislation that proposes a cap-and-trade system to reduce human carbon emissions, and I question whether controlling human activity can have any influence on the climate. … Though it is not widely covered in the media, there is considerable debate within the scientific community regarding the theory of anthropogenic global warming.” Hatch then regurgitated a bunch of falsehoods popular among deniers. Back then, Hatch maintained a climate-denying webpage, which Utah Republican and Earth scientist Barry Bickmore described as “riddled with red herrings, references to studies that have since been refuted by other scientists, and … fraudulent data.” 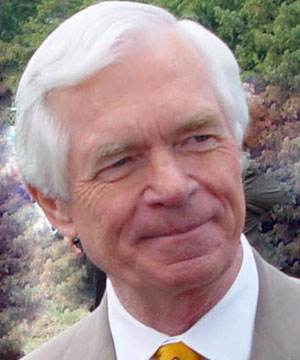 The powerful Appropriations Committee produces the budget bills that dictate how much each agency gets and for what purpose. That means funding for pollution regulation at the EPA, and clean energy research at the Department of Energy. To have Cochran, a staunch conservative, take over the committee will mean two things: funding cuts and fights over the EPA’s power plant regulations.

As The New York Times reported Tuesday, “At this point, Republicans do not have the votes to repeal the E.P.A. regulations … but they say they will use their new powers to delay, defund and otherwise undermine them.” That’s where Cochran will come in, with attempts to defund the regulatory process behind the rules. Cochran’s committee can also attach unrelated riders to the budget, like approval of Keystone XL, forcing Obama to veto the entire budget or sign it into law. Cochran has already voted to force Keystone approval and to prohibit the EPA from regulating carbon. 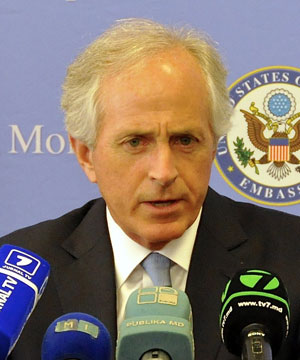 Corker is as close to a climate hawk as anyone in the senior Republican leadership. He said in 2008 that he accepts climate science. He opposed the Lieberman-Warner cap-and-trade bill being discussed at the time, yet he said he was open to cap-and-trade if it returned all the proceeds of auctioning carbon pollution permits to the public. In 2009, Corker made nice with Al Gore during an appearance by Gore in front of the Foreign Relations Committee.

But when the Waxman-Markey cap-and-trade bill passed the House later in 2009, Corker bashed it. And more recently, he backed McConnell’s bill to block EPA carbon rules, issuing a statement that whined about the need for low-cost energy, without even a token nod to the existence or importance of climate change. So even though he may still accept the reality of climate change, don’t expect him to support efforts to do anything about it.

Ratification of an international climate treaty would emanate from the Foreign Relations Committee. Of course, Obama knows he can’t get enough votes for a climate treaty, so he’s looking to draft an agreement that wouldn’t require Senate approval (kinda like his recent deal with China). But Republicans, possibly through Corker’s committee, could try to disrupt U.S. participation in the U.N. Framework Convention on Climate Change, the body organizing the international climate negotiations, as well as other organizations like the Intergovernmental Panel on Climate Change.

Relax — California isn’t about to dump pesticides on organic farms