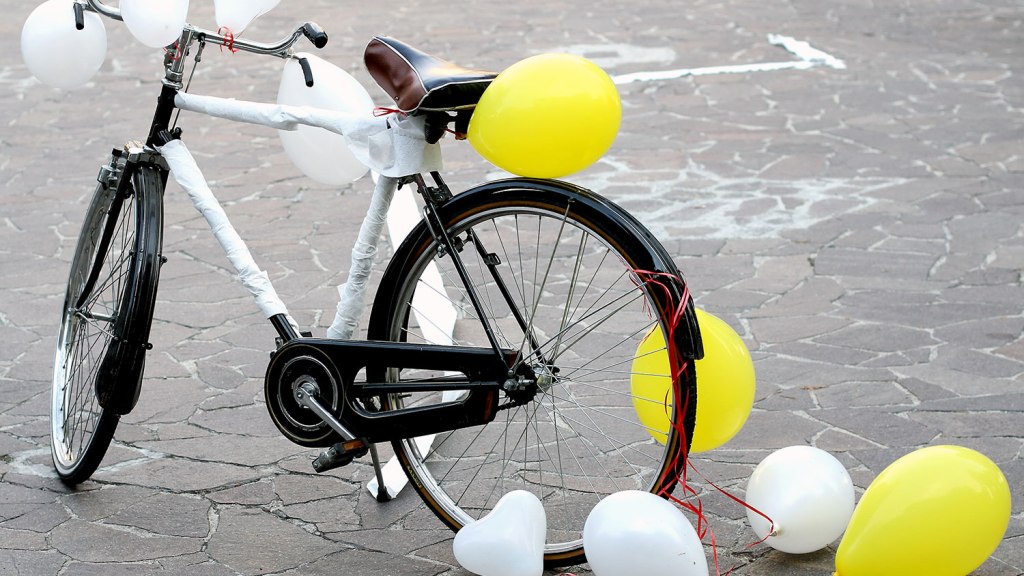 Much to the delight of the staff here at Grist, 2014 was a banner year for bikes. Beautiful and efficient bike lanes are multiplying here in the U.S. and abroad, bikeshare systems are booming, and major metropolises nationwide are starting to embrace bike infrastructure as an integral part od smart urban planning and transportation design. We’ll gladly champagne toast to that.

We spent some time this week pedaling through our bike coverage from 2014, and here are our favorite stories of the year:

Our post about Copenhagen’s new bike skyway, the Cykelslangen (soo-cool-klag-en), was one of our most viewed stories of the year, because, well, this bike lane totally rules. Bicyclists can move freely without interruption from pedestrians on the elevated roadway, and it’s pretty spiffy looking, to boot. It’s worth noting that the Netherlands also stepped up to the cycling plate this year with two equally impressive solar-powered bike lanes: This Van Gogh-inspired lane glows in the dark like “Starry Night” while this solar-powered bike lane will eventually generate enough electricity to power three households.

2. “Why Minneapolis’ beautiful bike freeways are totally the best”

We may not be the Netherlands or Denmark but U.S. cities are getting there, slowly. Unlike other major cities like New York and San Francisco, whose bike lanes are woven into the gridlock of regular street traffic, Minneapolis’ bike freeway system is surprisingly scenic. And Pittsburgh is doing it right when it comes to shielding bikers from traffic, too.

3. “What to do if you’re hit by a car while riding your bike”

As our own Greg Hanscom unfortunately found out in July when he was hit by a car while biking home from work, there are five things bikers should do if they’re ever found in a similar situation:

His followup, “Bright ideas for biking at night,” also offers some handy — and very important — tips for staying safe on your pedal-powered steed.

Bikers in the Golden State can soon breathe a little easer: This spring, California’s Department of Transportation signed on to the National Association of City Transportation Officials guidelines for street design — a move that will help improve bike infrastructure on city streets. Kumbaya, bikers and drivers, kumbaya.

5. “Why bikers should live by the same laws as everyone else”

Much to the disappointment of some our readers who think it should be legal for bikers to roll through red lights and stop signs (only after stopping to check for oncoming cars and pedestrians, of course), Ben Adler argues that the “Idaho stop,” as it’s called, is a bad idea for everyone — pedestrians, drivers, and bikers alike. Slow your roll, bicyclists … into a complete stop, that is.

“The difference between the racism suffered by people of color and the bikism experienced by people of ten-speeds couldn’t be starker,” writes Brentin Mock in this poignant read on how using bicycling as a metaphor for explaining white privilege to white people just isn’t cool.

7. “Can the Motor City sell America on the Model T of bicycles?”

Heather Smith sat down with Detroit Bikes to talk shop about what it takes to mass-produce simple, affordable commuter bicycles. Can you dig it? Yes, we can.

8. “Buying a bike? Now you can use Twitter to find out if its stolen property”

Back in June, Smith also reported on two online bike registries — stolenbikeregistry.com and bikeindex.org — joining forces to become one of the most comprehensive national bicycle registries out there. Now we can all bike with slightly better consciences.

9. “U.S. bikeshares have killed a shocking amount of people”

Not a single death has been recorded since the country’s first bikeshare program launched in 2007. But which city has the best bikeshare — New York City, Montreal, or Boston? Smith offers her thoughts on the growing civic trend here.

10. “Bike lanes save lives AND money”

Finally, science proves two things we’ve been saying all along: Better cycling infrastructure saves cities money by lessening the risks of traffic-related fatalities, and protected bike lanes empower cyclists to ride while reducing their chances of being hit. Thanks, science!

And thank you, dear readers, for making a few of these posts some of our most popular yet. If 2014 is any indication of what’s in store for biking this year, I’d venture to guess that 2015 will be chock full of even more promising urban biking news. So get your whip polished up and road-ready, and maybe even get a little crazy with the Monkey Lights if the mood strikes. We bikers have a lot to look forward to.