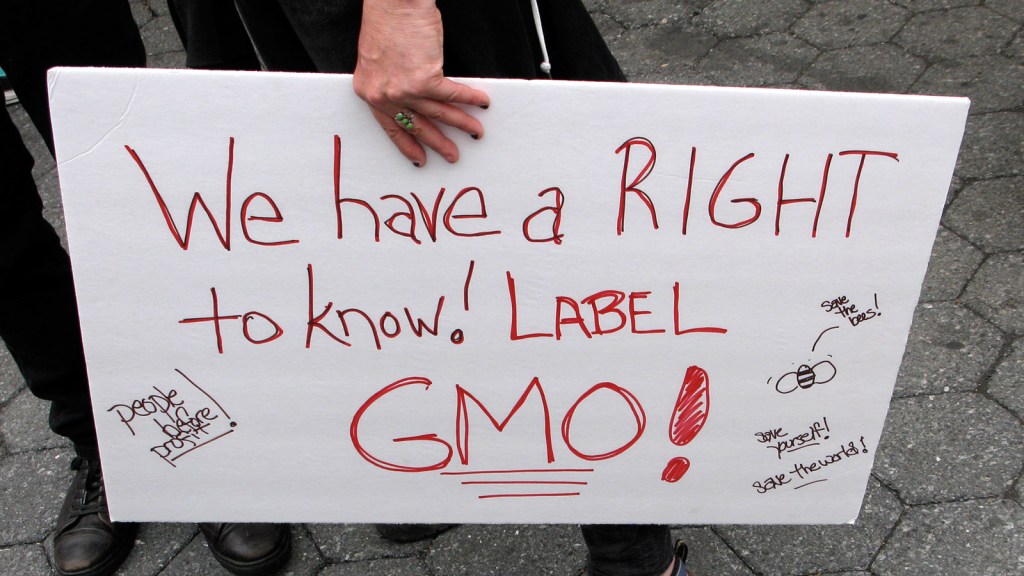 After efforts to label genetically engineered foods failed in Oregon and Colorado, Politico’s Jenny Hopkinson tweeted, “For those keeping score: the food and biotech industries are now 4-0 on GMO labeling ballot initiatives.”

First California, then Washington last year, now Oregon and Colorado. And actually there was a fifth: Back in 2002 Oregon tried and failed to label GMOs. There’s an unmistakable pattern here. When I asked Stuart Elway, president of the Seattle-based polling firm Elway Research, what he saw in the numbers, he said it was déjà vu.

“It was polling pretty high, then in the last month it was like I was looking at the Washington experience again: It cratered and lost,” Elway said. “This pattern repeats itself. People initially think it’s a good idea without considering it much, then the campaign against the initiative comes in and spends a gazillion dollars, and they start to have second thoughts.”

The same thing happened in California and Colorado, though in Colorado the swing was much bigger — from 54 percent of voters supporting the initiative early on to 66 percent voting against it in November. All the other measures have just barely lost, but in Colorado it was definitive. That’s the difference between the food companies spending three times more than the pro-labeling people (in Oregon) and outspending them 20 times over (as in Colorado).

Clearly, the money matters a lot. But just as important as the money is the fact that people are willing to change their minds on this issue. As I wrote last year, after the Washington initiative failed:

It’s clear that, in this case, advertising swayed public opinion. But at the same time economists have established that it’s hard to change opinion with political spending. So what gives? Well, there’s an exception to the rule. While it’s nearly impossible for advertising to shift core values — like getting a lifelong Democrat to vote Republican or vice versa — it is possible for advertising to change the mind of someone who hasn’t fully committed. When people haven’t encountered the arguments on each side, those arguments tend to work.

In general, people are suspicious of GMOs, but totally clueless about the details. The documentary GMO OMG and Jimmy Kimmel both made this point by asking random people about genetic engineering. Most people want to know if there are GMOs in their food, and most people have no clue what that means. Only when GMOs become a high-profile election issue do people learn about them. When that happens, some people become very worried, but then, for many, that initial suspicion evaporates.

I, and others, thought that Oregon had a chance to pass this. And it could have — it failed by just the slimmest of margins. I thought young people, eager to legalize marijuana, would also cast their votes for labeling. There was almost a linear relationship between age and the likelihood of voting yes for pot, Elway said. But age wasn’t a significant factor when it came to GMO labeling, he said.

After the labeling initiative failed in California, in 2012, there was some suggestion that voters just had too much on their ballots that presidential election year to parse the competing claims. After the Washington initiative failed in 2013, I speculated that it had something to do with low turnout. In Oregon, according to Secretary of State Communications Director Tony Green, turnout was almost exactly average for a midterm.

Enough money can win this game, no matter what the starting conditions, it seems. Would you, could you in a box?

So what happens next?

I’ve bemoaned the political capital progressives are expending on GMO issues (and suggested a lot of better ways to fix up our food system).

But this sword cuts both ways: The food industry has exactly the same problem, except instead of political capital, the industry is spending the old-fashioned kind of capital, the folding kind with portraits of dead presidents. Every time activists get one of these initiatives on the ballot, companies start digging deep into their pockets. That spending has been effective so far, but if these labeling initiatives keep coming, the laws of stochasticity guarantee that eventually one will pass. There’s a lot left to chance in elections — especially when the margins are so small.

Sooner or later, you’d think, the CEOs of these companies would throw up their hands and say, we can’t keep spending all this money! At least that was my assumption. But when I started asking people in the industry about this off the record, they didn’t seem too worried about the dough.

Sure, they are looking for other strategies; executives are saying they are pro-labeling now, but they mean voluntary labeling that would nullify mandatory labeling laws. And sure, they’d like to keep their cash, but the expenditure also helps them. Each initiative battle works as marketing for genetic engineering companies. It gives them a forum in which they can try to win over that vast majority that harbors a vague apprehension that genetic engineering is bad.

A lot of the messaging in that forum is deceptive and lame; that’s just how campaign advertisements are. But initiatives also draw the media in. When veteran health and environmental reporters dig into the GMO debate, they start showing people what all the most trustworthy scientific and medical institutions have found: This technology is no riskier than other cherished new technologies we constantly introduce into our lives.

I saw this happening among friends in Oregon. One Oregon voter argued for a “no” vote because he thought the initiative was a tricky agribusiness plot that would force the labeling of transgenic plants, but allow those genetically engineered with RNA silencing to slip into the food supply unlabeled. If you get past the conspiracy theory, he had a point. When relatively smart people actually start thinking about GMO labeling, they start to wonder why everyone is focused on one kind of genetic modification while giving others a free pass. Why are we worried about transgenes (genes moved from another species), but ignoring cisgenesis, embryo capture, radiation induced mutagenesis, chemically induced polyploidy, somaclonal variation, and gene editing?

You don’t need to look all those things up. Here’s the point: The main problem with the anti-GMO crusade is that it picks one very limited issue out of the whole constellation of agricultural practices. And when clear-eyed people see the big picture, they often conclude that there are much more important issues to address. At least, that was my experience.

This is all just so stupid

Big companies may be happy to keep fighting these initiatives; it gives them the opportunity to tell their story. But I really don’t want to be writing another piece like this in 10 years.

The corporate messaging-via-elections works, but it also politicizes what is really a subtle risk-management issue. The vote in Oregon wasn’t about science; it was about tribal identity. The more liberal, urban tribe along the coast voted in favor of labeling. Rural conservatives, especially east of the Cascade Mountains, voted against. In battling this out, in state after state, the nonpartisan question of how to weigh the risks and benefits of new inventions is turning into a badge of group membership, a marker of political identity.

The best possibility I see for ending the madness is to try mandatory labeling. It may happen in Vermont. My guess is that food makers would slap GMO labels on everything that might have gotten some beet sugar or corn starch in it, just to be on the safe side. We’ll have labels on most processed food that’s not organic-ish. People will see it everywhere, and then stop seeing it, in the same way Californians have grown numb to the ubiquitous signs, from another initiative, warning them that every coffee shop and power cord contains chemicals known to cause cancer and birth defects.

Americans have shrugged at GMO-free Cheerios, and there’s some evidence that eaters wouldn’t interpret a GMO label as a skull and crossbones. That doesn’t seem so bad.

Of course, there is another way forward: a federal law blocking mandatory GMO labeling, and setting standards for voluntary labels. I’d assumed such an approach could never pass. But when I spoke to Karen Batra at the Biotechnology Industry Organization, she pointed out that we have a new Congress now. It may not happen right away, she said, but industry leaders think that, if they are patient, lawmakers will eventually pass something like this.