Among the many bits of bad news for the environment from this year’s midterm elections, one that got lost in all the drama around control of the Senate is that a trio of far-right governors of swing states managed to win reelection: Wisconsin’s Scott Walker, Florida’s Rick Scott, and Maine’s Paul LePage. They were elected in the 2010 Republican wave, with support from the Tea Party movement, despite being way to the right of their states’ electorates. They looked vulnerable this year but they held on.

All three are against environmental regulation, in the pocket of big business, and uninterested in combatting climate change. This won’t just affect the quality of the air and water in their own states. With Congress unwilling to cut carbon emissions, some of the biggest strides on climate are being made at the state level, where policies such as renewable energy portfolio standards are building clean energy industries. States also influence a lot of local policies with climate ramifications, from transportation to waste management.

Most importantly, the EPA’s proposed emission limits for power plants will actually be implemented by states. And if the states drag their feet, it will be easier for President Obama’s successor to delay, weaken, or reverse the regulations. The rules for existing power plants will be finalized in June of next year, after which states have one year to submit compliance plans. But if they want to, they can push that back an additional year, until mid-2017. And states that are going to comply by forming a regional or multi-state compact will have until 2018. Meanwhile, a new president, possibly a Republican, will take office in January 2017. So more anti-environment governors means more states that are likely to put off drafting a compliance plan in the hopes that a conservative president cuts them more slack. “If states haven’t yet submitted their proposals [by the 2016 election], then there is some opportunity to delay the rule,” says Tyson Slocum, director of Public Citizen’s energy program.

Here’s a rundown on the Tea-Partying governors: 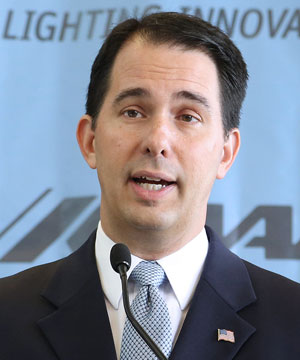 Defeating Walker would have been especially sweet for liberals, as he is a Republican presidential prospect and a notorious bête noire to the left. In 2011, he signed a law revoking the collective bargaining rights of public employees in order to crush the unions. Voters tried to recall him, but with support from the Kochs, other rich Republicans, and corporate interests, he won the recall election. (During the height of union protests, Walker was recorded sucking up to a prankster posing as David Koch.) And this year, with backing from those same cronies, he outspent his Democratic opponent, former bike exec Mary Burke, and won again.

His pro-corporate philosophy is bad news for the environment. Here is what I wrote about Walker last month: “He has avoided taking a stance on climate science, but he has pledged never to pass a carbon tax, and he’s raised money for the Heartland Institute, a notorious climate-denier group. He’s also worked to hamper rather than promote clean energy, for example by imposing regulations to keep wind turbines further away from homes.” Walker turned down $810 million from the federal government to build a rail line between his state’s two biggest cities. In September, he signed a letter to Obama complaining about the EPA’s proposed power plant rules.

Walker will continue to govern from the right, of course — he wants to loosen environmental regulations on frack-sand mining, and his state Department of Natural Resources will presumably continue to police pollution violations more lightly than under his predecessors. But with an eye toward 2016, Wisconsin political pundits speculate that his most extremist days are over. At least, until he gets into the White House. 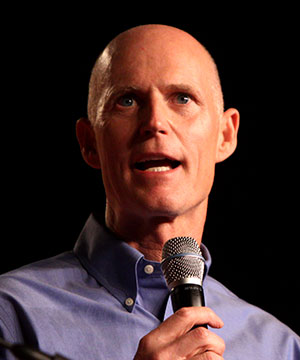 Scott was a major target for green groups, like Tom Steyer’s NextGen Climate Action, and for good reason. He’s a climate denier, despite living in a vulnerable state where coastal flooding at high tide is already common. Scott deploys the ridiculous “I’m not a scientist” excuse when asked about climate change. During the campaign, when he was under pressure for dodging the issue, he reluctantly agreed to meet with some of his state’s climate scientists, but he didn’t ask them a single question.

Scott has raised millions from the state’s energy utilities, and he’s given them what they want. According to Reuters, Scott, “support[ed] utility rate hikes to cover massive investments in new power lines, natural gas pipelines and nuclear plants that environmentalists oppose … [while] the state’s renewable energy programs, including solar installation rebates, were dismantled.” Like Walker, Scott rejected federal stimulus dollars to build a high-speed rail line.

Florida is a purple state, so in an off-year election, in which the older, whiter electorate leans more Republican than in presidential years, it might not have seemed like Scott would be easy to knock off. But he is unpopular among Floridians, so he was vulnerable. His opponent, Charlie Crist, is a climate hawk — and a former governor, former Republican, and shameless opportunist who switched parties to run. Exit polls showed that 53 percent of the voters held an unfavorable view of Scott, while just 44 percent held a positive view of him. Crist had almost precisely the opposite approval numbers. Yet somehow Scott edged Crist out by 66,000 votes out of 5 million cast. Well, voters do a lot of strange things, especially in Florida, and now they’ll be paying for this one. We all will. 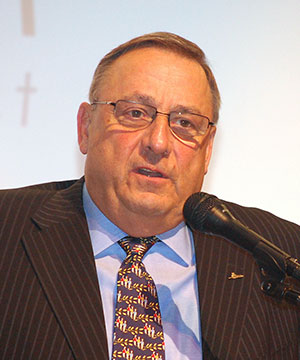 Maine, which has elected two independents as governor, has an idiosyncratic political culture. It’s home to some of the very last remaining Republican moderates like Sen. Susan Collins, but the state GOP was taken over in 2010 by LePage’s right-wing contingent. He won a surprise victory that year thanks to the third-party candidacy of Eliot Cutler, an environmental lawyer and former Carter and Clinton administration official, who split votes with the Democrat.

This year, LePage was targeted by environmentalists such as the League of Conservation Voters and NextGen Climate. His approval ratings were steadily under 50 percent, so political analysts ranked his race a toss-up or leaning Democratic. But Cutler again chose to undermine his life’s work by running as a third-party candidate. He pulled more than LePage’s margin of victory, and LePage was again elected without a majority.

LePage has governed like you would expect a right-wing businessman to, with particularly bad results for the environment. As the Bangor Daily News observed, “Where the effect of LePage’s business-friendly approach is most evident is the Department of Environmental Protection.” Citizens for Responsibility and Ethics in Washington points out that LePage is particularly lax on ethics: “Augusta [the state capital] is a dangerous place for anyone who gets in the way of Gov. LePage’s ALEC-written agenda. The first-term governor packed his administration with lobbyists and used his office to promote their environmental-deregulation agenda.”

Climate change is a serious concern in Maine, where it is threatening the state’s coastline and damaging its fishing industries, but LePage doesn’t intend to do anything about it. He’s undergone a common evolution among Republican politicians on climate change. Back in 2010, he refused to fully accept climate science, saying that while the Earth is warming, “I just don’t know how severe it is and I’m not sure how much we as human beings contribute to it.” He misleadingly added that “scientists are divided on it.” In December of last year, though, he shifted to making excuses for why climate change should be allowed to continue. “Everybody looks at the negative effects of global warming, but with the ice melting, the Northern Passage has opened up,” said LePage, referring to the Northeast Passage, a shipping route through the Arctic Circle.

As a blogger for Daily Kos observed at the time, “Just to prove how seriously [LePage] actually takes the issue, in June this year he vetoed a study designed to prepare residents and businesses in Maine for the risks they will face from climate change. That study was meant to be follow-up to a study in 2010 under the previous administration …. Gov. LePage shelved that study when he came into office.”

The best thing that can be said about LePage is that he has not pulled Maine out of the Regional Greenhouse Gas Initiative. That’s more than Chris Christie can say.