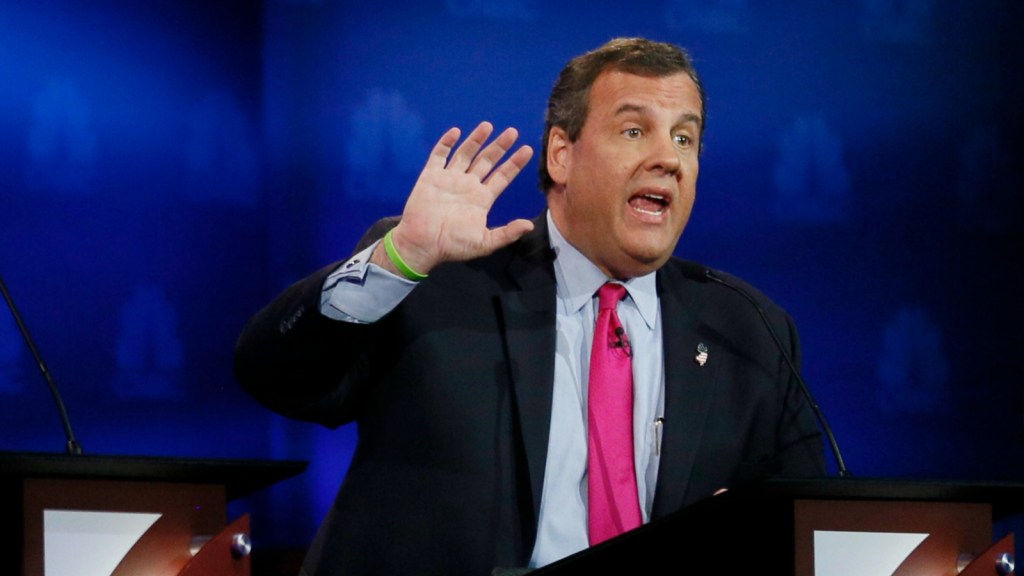 The moderators of Republican presidential debates seem to have decided not to bother asking climate science deniers — which include most of the candidates — about climate change. On Wednesday, the third GOP debate had only one question about climate change and it was directed at New Jersey Gov. Chris Christie, one of the few candidates who acknowledges the climate is warming and one of the only two Republicans to have said anything about climate change in a previous prime-time debate. Last time, he just agreed with Florida Sen. Marco Rubio’s false talking points about how climate action is too expensive.

This time Christie’s answer was more in-depth. Unfortunately, it was just as dishonest and ignorant as Rubio’s. Here’s a transcript, lightly edited to cut out Christie’s trademark bullying of the moderator, CNBC’s John Harwood:

Harwood: Gov. Christie, you’ve said something that many in your party do not believe, which is that climate change is undeniable, that human activity contributes to it, and you said, “The question is what do we do to deal with it?” So, what do we do?

Christie: Well, first off, what we don’t do is do what Hillary Clinton and John Kerry and Barack Obama want us to do, which is their solution for everything: put more taxes on it, give more money to Washington, D.C., and then they’ll fix it. Well there’s no evidence that they can fix anything in Washington, D.C.

Harwood: What should we do?

Christie: … We’ve laid out a national energy plan that says that we should invest in all types of energy … If you ask who the top three states are that produce solar energy — California and Arizona are easy, but No. 3 is New Jersey. Why? Because we worked with the private sector to make solar energy affordable and available to businesses and individuals in our state. We need to make sure that we do everything we can across all kinds of energy: natural gas, oil, absolutely, but also, where it’s affordable, solar. Wind in Iowa has become very affordable and it makes sense. That’s the way we deal with global warming, climate change, or any of those problems — not through government intervention, not through taxes. And for God’s sake, don’t send Washington another dime until they stop wasting the money that we’re already sending there.

• New Jersey is third in solar energy production because “we worked with the private sector to make solar energy affordable and available to businesses and individuals in our state.”

Christie actually weakened New Jersey’s renewable energy goal. His predecessor, Democratic Gov. Jon Corzine, set a goal of getting 30 percent of the state’s electricity from renewable sources by 2021; Christie lowered that to 22.5 percent. The director of the Sierra Club’s New Jersey chapter, Jeff Tittel, attributes the state’s strength in total solar deployment to Christie’s predecessors. “Under Christie, we went on monthly solar installation from second in the nation down to eight, and we are still No. 3 on overall installation because of past administrations. We will be fourth soon,” says Tittel. According to the Solar Energy Industries Association, New Jersey is third in cumulative installed solar capacity, but fifth in solar capacity per capita and not even in the top 10 for the percentage of new electrical capacity that comes from solar.

We reached out to Christie’s spokesperson for comment on what solar policies Christie was referring to at the debate and response to Tittel’s criticism, but have not heard back yet. It’s possible Christie was referring to a 2012 bill he signed to reinvigorate the New Jersey solar market after it hit hard times in 2010 and 2011. According to Greentech Media, that law accelerated requirements for solar under the state’s Renewable Portfolio Standard, made regulatory changes to facilitate net-metering, and encouraged solar installation on brownfields and landfills. In other words, Christie used “government intervention” to facilitate and even require private sector adoption of a cleaner source of energy — just like Obama and Clinton would.

• “What Hillary Clinton and John Kerry and Barack Obama want us to do [is] put more taxes on it, give more money to Washington, D.C., and they’ll fix it.”

That’s not an accurate description of Obama’s or Clinton’s climate change plans. Obama’s Climate Action Plan involves no new taxes. Rather, he is boosting energy efficiency and renewables through gradually implemented regulatory actions like the Clean Power Plan. Clinton’s climate agenda isn’t fully fleshed out, but thus far it contains no taxes either. Clinton pledges to complete implementation of the Clean Power Plan and to increase incentives for renewables. Even many of those who do support a carbon tax, including a number of conservative public intellectuals, don’t want to “give more money to Washington, D.C.” — they want to charge polluters a fee and rebate the revenue to taxpayers.

• “We need to make sure that we do everything we can across all kinds of energy: natural gas, oil, absolutely, but also, where it’s affordable, solar.”

Huh? If you are trying to solve climate change, then it is obviously counterproductive to “do everything we can” to increase production of oil, which is the second-largest source of carbon emissions after coal. Natural gas isn’t a great solution either; it may produce electricity with a lower greenhouse gas footprint than coal, but studies suggest that methane leakage during natural gas production and transport could wipe out the fuel’s climate benefit. And when Republicans talk about promoting natural gas, they also tend to mean encouraging the exportation of liquefied natural gas, which has an even larger climate impact because of all the energy required to cool the gas, transport it across the ocean, and then regasify it.

In fact, Christie’s reputation for being a relative moderate on climate change is largely undeserved. He withdrew New Jersey from the Regional Greenhouse Gas Initiative, a cap-and-trade system in the Northeast that would have raised more than $100 million for the state. New Jersey environmentalists deplore his record on climate change, conservation issues, and mass transit, for which he has cut funding. Hurricane Sandy devastated his state’s coast, but his administration conspicuously avoids mentioning any possible connection between Sandy and sea-level rise or climate change. Christie dismisses questions about the effect of climate change on storm intensity as “esoteric theories.” The standards of flood-proofing required to rebuild on the Jersey Shore do not take account of climate change and projected sea-level rise. Christie presents himself as a hard-headed pragmatist, but his climate change record and comments are more like that of a right-wing ideologue.