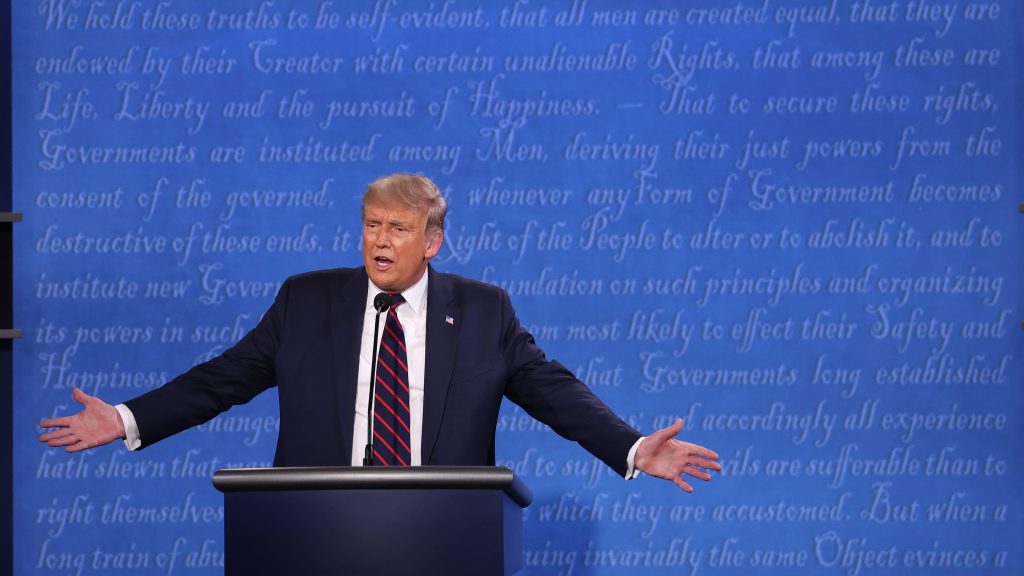 President Trump isn’t known for talking much about our rapidly overheating planet. He’s repeated claims that climate change is a Chinese “hoax.” And more recently, he was quoted saying “I don’t think science knows, actually” whether global warming is real. By and large though, the president has largely kept mum on the subject while not-so-quietly boosting the production of oil and gas.

But in Tuesday night’s first presidential debate, after Fox News anchor Chris Wallace pulled out a surprise climate change question, Trump was forced to give one of his longest statements yet on global warming. And to be generous, the president’s response was filled with some … interesting claims.

Here’s a quick fact-check of Trump’s statements on climate change.

“If you look at the Paris accord, it was a disaster from our standpoint.”

In actuality, the Paris Agreement didn’t force the U.S. to do anything. All countries made commitments to cut their greenhouse gas emissions, but those commitments are not legally binding — and countries are free to set their own goals. The only consequence for not following through is a kind of diplomatic public-shaming. (Imagine former U.N. Secretary-General Ban Ki-moon looking very, very disappointed.)

The U.S.’s goals, meanwhile, were incredibly modest: The Obama administration promised to reduce its greenhouse gas emissions 26 to 28 percent below 2005 levels by 2025. Due to the falling costs of renewables and a transition from coal to natural gas, the country might meet that goal anyway — which is cool but not at all up to the standard of actually fixing climate change.

Trump has nevertheless begun the process of pulling the U.S. out of the landmark climate agreement. But due to a coincidental quirk of politics the process won’t be completed until November 4 — the day after the presidential election.

Probably false. Also, not a solution to climate change.

President Trump has apparently been obsessed with planting trees since his son-in-law, Jared Kushner, introduced him to tree-planting enthusiast Marc Benioff, who is also the chief executive of customer management software maker Salesforce. Thanks to Benioff’s efforts, Trump announced in January that the U.S. would officially join the 1 Trillion Trees Initiative. (The goal was always to plant 1 trillion trees worldwide. The U.N. did launch “The Billion Tree Campaign” in 2006, but it reached its goal more than a decade ago.)

So far, however, it’s not clear that the U.S. has planted any trees as part of the initiative. The U.S. branch of the program launched in August, and pledged to plant at least 855 million trees by 2030. It’s not like the federal government to be approximately 10 years ahead of schedule.

“Every year I get the call: California is burning. … If that was cleaned, if you had good forest management, you wouldn’t be getting those calls.”

While scientists agree that thinning trees, clearing out brush, and setting prescribed burns can help avoid catastrophic Western wildfires, there is also consensus that rising temperatures are fueling larger and faster-moving fires. In California alone, the area burned annually has quintupled since 1972 — and that’s expected to get worse unless the West gets both climate change and its forests under control. (And it’s worth noting that the vast majority of forestland in California is federally owned, so the responsibility for managing it ultimately falls to Trump.)

Trump also repeated his claim that “forest cities” in Europe have such excellent management that they don’t experience any forest fires — which the agricultural minister of Austria previously tried to set straight. “You will find no ‘forest cities’ in Austria,’” wrote Elisabeth Köstinger in an article for the Independent, after President Trump singled out her country in an interview with Fox News a few weeks ago. “You will find habitats closely intertwined with forests.”

“[Green New Deal supporters] want to take out the cows.”

Exciting as it is to imagine Green New Deal-ers hiding on livestock farms sniping cows, no one is talking about getting rid of our bovine friends entirely. Although it would be nice to keep them from belching up quite as much planet-warming methane …