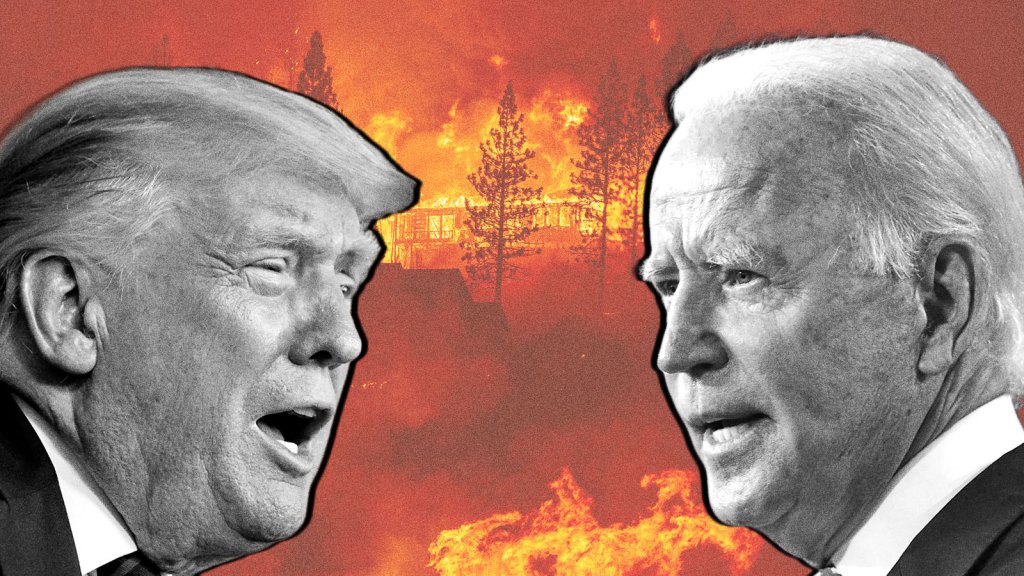 2020 has been such a bizarre year, it’s given rise to its own alarming vocabulary — “firenado,” “social distancing,” and “super-spreader,” to name a few newly common terms. But now, as thick, choking smoke and ash ripple across the West, Democratic presidential nominee Joe Biden is adding one more: “climate arsonist.”

Delivering remarks from his hometown of Wilmington, Delaware, on Monday, the former vice president referred to President Trump using this eco-minded epithet. Citing the West’s wildfires, flooding in the Midwest, and hurricanes on the coast, Biden warned that the effects of global warming are becoming more obvious and more dangerous — and the man whose job he wants is ignoring them.

The fires in the western U.S. over the past week and a half have torched millions of acres and put hundreds of thousands of Americans under evacuation orders — against the backdrop of the still-ongoing pandemic. The blazes have been so bad that they turned the skies over the San Francisco Bay Area a dark orange; meanwhile, air quality in parts of Oregon has been literally off the charts.

Amid the catastrophe — and even as his opponent blasted him on his environmental record — Trump continued to sing from the hymnal of climate denial. At a roundtable with California Governor Gavin Newsom on Monday morning, the president dismissed any evidence of global warming.

“It’ll start getting cooler, you just watch,” he said, in response to a question from the state’s natural resources secretary. When challenged on this statement, Trump retorted, “I don’t think science knows, actually.”

"I wish science agreed with you" – CA Natural Resources Secretary.

It was a chilling reminder of the president’s unscientific claim, back in February, that one day the coronavirus would vanish. “One day, it’s like a miracle, it will disappear,” Trump said. (To date, there have been 6.5 million cases of the coronavirus in the United States, and almost 200,000 Americans have died.)

The president also reiterated his 2018 claims that the solution to California’s fires is “raking and cleaning.” “When you have years of leaves, dried leaves on the ground, it just sets it up,” he said shortly after landing in Sacramento. “It’s really a fuel for a fire. So they have to do something about it.”

Scientists agree that thinning trees, cutting back brush, and setting controlled burns can help reduce wildfire risk — but also point out that higher temperatures driven by climate change are making fires burn hotter and faster. Stopping the catastrophic fires, according to many experts, will take both aggressive emissions cuts and better forest management.

Interestingly, the responsibility for managing nearly all of the forest land in California falls on the federal government, according to Newsom. “One thing is fundamental,” the governor told Trump, “Fifty-seven percent of the land in this state is federal forest land, and 3 percent is California.” (That means 95 percent of the state’s total forest land is owned by the federal government, if you’re keeping score at home.)

With the election now less than 50 days away, the president’s comments and those of his challenger stood in sharp contrast. Biden has made climate change a centerpiece of his campaign, vowing to spend $2 trillion on a clean energy transition and produce all U.S. electricity from carbon-free sources by 2035. He has also repeatedly connected the fight against climate change with creating American jobs, embracing many aspects of activist-led push for a Green New Deal.

Trump, on the other hand, has been waging a war on environmental regulation since he was elected, dismantling Obama/Biden-era rules, as well as decades-old ones, and opening up federal lands for oil and gas drilling. Until this week, the president was also notably silent on the West’s disasters, distracted by political fires in Washington over the way his administration has responded to the COVID-19 crisis and his alleged comments disparaging fallen military members.

It remains to be seen how much the current crisis in the American West will even factor into the campaign. In the 2016 debates, for instance, the presidential candidates spent only 5 minutes and 27 seconds discussing climate change — and almost all of that time was Hillary Clinton speaking.

Meanwhile, a Pew poll released in mid-August suggested that climate change wasn’t among the top 10 issues that voters deemed very important. It stacked up behind concerns about the COVID-19 pandemic and racial inequality, both of which have been all over the news for months. But as hurricane season approaches its usual fall peak and the whole country feels the effects of wildfire smoke — a NASA model predicts that, by Wednesday, smoke from the Western blazes will reach all the way to the East Coast — climate change’s importance as a voter issue could change quickly.