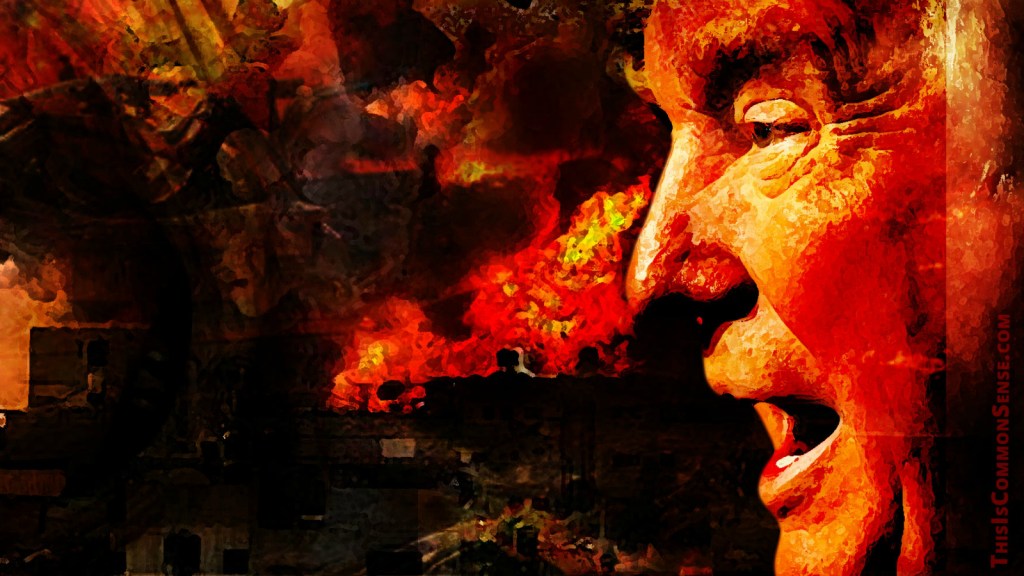 In a single day, President Trump did more environmental damage than during his previous 67 days in office. That’s no small achievement.

With an executive order signed on March 28, he supercharged the process of demolishing President Obama’s climate initiatives, including his signature one, the Clean Power Plan. It’s not just climate hawks, treehuggers, and grandstanding Democratic politicians who are aghast. Mainstream media outlets are, too.

“President Trump’s move to rip up Mr. Obama’s climate policies [is] beyond reckless. Children studying his presidency will ask, ‘How could anyone have done this?’” the Washington Post editorial board wrote. The New York Times ran its own anxious editorial under the headline “President Trump Risks the Planet.”

Trump’s move means the U.S. will pump out a lot more greenhouse gases than it would have if Obama’s policies had been continued.

And it will make climate change still worse by weakening the resolve of other countries to curb their emissions.

Here’s a rundown of what Trump is aiming to do with his executive order as well as other recent moves:

What happened? Old coal-fired power plants may get to keep polluting the air we breathe and the atmosphere that sustains life on earth, thanks to Trump’s call to toss out the Clean Power Plan. And future power plants may not be held to tougher standards that would have largely prevented new coal plants from coming online.

What does it really mean? This is A Big F’ing Deal. These power plant rules were the most significant part of the Obama administration’s effort to meet its emission-cutting pledge under the Paris climate agreement. If the U.S. is wimping out on Paris, other countries will be more inclined to wimp out, too.

But undoing the Clean Power Plan will likely take years and will definitely be challenged in court, so it’s far from a done deal. Plus, cheap natural gas means utilities aren’t likely to build new coal-fired power plants anyway, because gas plants are less expensive to run.

What happened? The Obama administration tried to tighten regulations on fracking on federal and tribal lands to prevent water pollution. It also tried to rein in methane pollution from oil and gas operations on public lands. Trump’s executive order calls for those rules to be reviewed and rewritten.

What does it really mean? The Trump administration is working to remove all obstacles that stand in the way of the oil and gas industry, pure and simple.

Full speed ahead!
Trash other rules that restrain the oil, gas, and coal industries

What happened? Trump’s executive order tells federal agencies to review regulations and actions that potentially “burden” domestic energy development, and gives them 180 days to come up with plans to scale the regulations back.

What does it really mean? We don’t know how many rules will get dragged into this process and ultimately be weakened or tossed out, but the message is clear: Drill, baby, drill. Mine, baby, mine.

What happened? The federal program that leases land to coal companies for mining is a big money loser as well as a climate killer. In January 2016, the Obama administration put a moratorium on the program so it could consider how to improve it, potentially by charging more for coal leases and taking into account the climate impacts of mining. With his executive order, Trump called for the moratorium to be reversed, and Interior Secretary Ryan Zinke promptly did just that. Zinke also cancelled the big review of the program, so major reforms won’t be coming anytime soon.

What does it really mean? This won’t lead to much new coal mining immediately, as there’s currently a glut of coal on the market and companies already have plenty of reserves. But it means that the coal-leasing program will continue to waste taxpayer money, subsidize coal companies, and worsen climate change.

What happened? Under Obama, federal agencies were required to consider the full economic cost of climate change when making decisions about projects. The administration determined that a metric ton of CO2 pollution currently costs society about $36 — that’s called the social cost of carbon — and this number has been factored into cost-benefit analyses for regulations and other government actions, often supporting regulations that require emissions cuts.

With his executive order, Trump is calling for a new review of the social cost of carbon, and he’s tossing out the requirement to consider climate in impact statements.

What does it really mean? Expect the social cost of carbon to drop, even though experts say it’s already way too low. Essentially, these are yet more ways for the administration to say it doesn’t give a damn about climate change.

Phew, that was quite the executive order. But wait, there’s more: Trump found time to pull some other scary moves between trips to Mar-a-Lago.

Having their spray
Allow use of a dangerous pesticide

What happened? Under Obama, the EPA proposed banning agricultural use of the toxic pesticide chlorpyrifos, but didn’t finalize the rule. Under Trump, the EPA did an about-face: On March 29, the agency officially declined to impose a ban.

What does it really mean? Scientific studies have linked even low doses of chlorpyrifos to developmental problems in kids. So children will continue to be exposed — especially the children of farm workers — while Dow AgroSciences, manufacturer of the pesticide, will continue to make lots of money selling it.

What happened? Just before Obama moved out of the White House, his administration finalized a review of its ambitious gas-mileage standards for future cars and trucks. On March 15, the Trump administration sent those standards back to the drawing board, calling for more review after automakers complained that they were too strict.

What does it really mean? Cars will likely guzzle more gas than they need to, and the shift to electric cars may slow down.

What happened? Just as promised during his first week in office, Trump revived the Keystone XL pipeline, which would carry some of the filthiest oil on the planet down from the tar sands of Alberta, across the American farm belt, and toward refineries on the Gulf Coast. Obama denied the pipeline builder a permit to cross the U.S.-Canada border. On March 27, Trump reversed course and granted the permit.

What does it really mean? Within days of Trump’s move, environmentalists filed two lawsuits attempting to stop the pipeline’s construction. Pipeline builder TransCanada still needs approval from Nebraska and may face financial hurdles. Even so, chances are better than ever that the world’s most controversial pipeline will get built.

Meanwhile, that other highly controversial pipeline, Dakota Access, is now finished and being filled up with oil, thanks to the OK it got from the Trump administration on Feb. 6.

Trump did not pull the U.S. out of the Paris Agreement, as some right-wingers have been calling for. The White House says a decision on that will be made by May 26, and maybe Ivanka Trump and Secretary of State Rex Tillerson can convince the president to stay in.

Trump did not ask the EPA to reverse its finding that greenhouse gas emissions endanger human health, which is the basis for the agency’s climate actions. The conservative Competitive Enterprise Institute has petitioned the agency to review that finding, hoping to overturn it. We don’t know how that will turn out, but in the meantime, the situation is making EPA Administrator Scott Pruitt very uncomfortable.