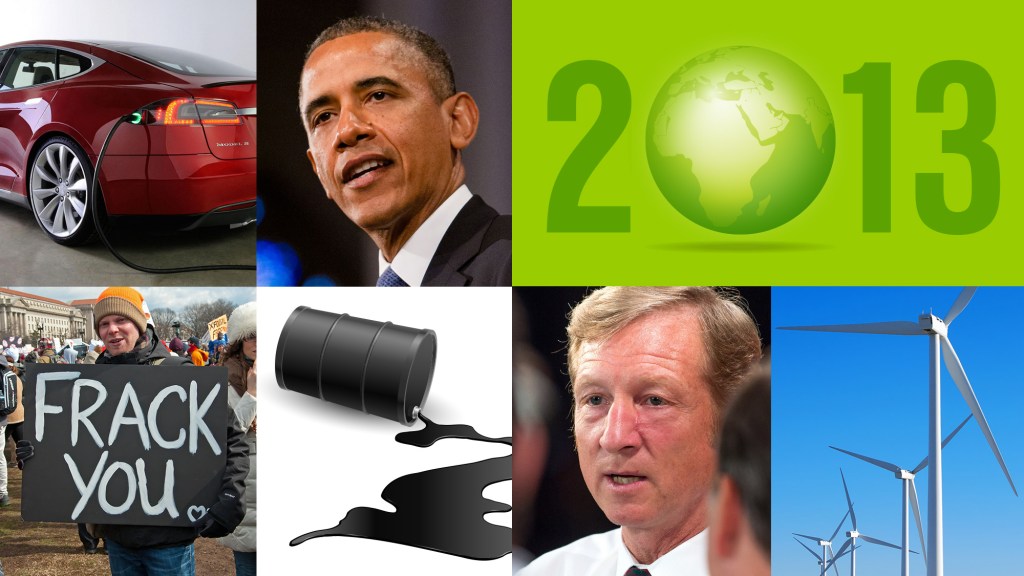 The environmental news this year was full of ups and downs, twists and turns, and deeply conflicted protagonists.

1. Obama shows he cares about the climate

President Barack Obama unveiled an actual, coherent climate plan in June, full of steps he can take without cooperation from Congress. The centerpiece is regulations cracking down on coal-burning power plants in the U.S. The plan also entails ending U.S. support for most coal plants abroad. And it calls for boosting renewables and energy efficiency, cutting fossil fuel subsidies, preparing for climate change that’s already inevitable, and lots of other good stuff. To the surprise of almost everyone, Obama also said he wouldn’t approve the Keystone XL pipeline if it were determined that it would “significantly exacerbate the problem of carbon pollution.” Of course, there’s lots of debate over that question. (And the Obama news wasn’t all rosy; see No. 6 below.)

Many Americans are refusing to stand idly by while fossil-fuel interests run rampant, and these activists made more noise than ever in 2013. A marathon of protests against Keystone XL have helped stymie federal approval, at least so far, and other pipeline projects have come under fire as well. Anti-fracking activism has kicked into high gear around the country. Residents of four Colorado cities passed bans or moratoriums on fracking in November, as did voters in Oberlin, Ohio. Fractivists have pushed Massachusetts to move toward banning fracking, and New York to keep a fracking moratorium in place while a study of health and environmental impacts plods forward. Meanwhile, residents of the Pacific Northwest are waging battle against plans for new and expanded coal export terminals. And the divestment movement is convincing a growing number of institutions to dump their investments in fossil fuels.

3. Greens get a billionaire backer of their own

Tom Steyer, a hedge-fund manager turned climate activist, started spending big this year on his pet cause — really big. He poured millions into political campaigns in 2013, helping to elect climate hawk Ed Markey (D) as a Massachusetts senator, Terry McAuliffe (D) as Virginia governor, and opponents of a proposed coal terminal in Whatcom County, Wash., as local council members. He’s pushed hard against the Keystone XL pipeline, voicing his views to Obama directly and hosting an anti-Keystone conference in D.C. He’s teaming up with fellow rich guys Michael Bloomberg and Hank Paulson to make the case that climate change threatens the entire global economy. Earlier this month, he launched a campaign for new oil drilling taxes in California. The L.A. Times describes Steyer as “liberals’ answer to the Koch brothers.”

U.S. coal and nuclear power plants are on their way out, while solar and wind power are growing rapidly. Increasingly, coal and nuclear facilities can’t produce electricity cheaply enough to compete with new wind, solar, and especially natural gas–powered plants. In the blustery Midwest, wind power is even becoming as cheap as electricity produced from fracked natural gas. Power plant owners this year announced they will close down four nuclear plants: Vermont Yankee in Vermont, San Onofre in California, Kewaunee in Wisconsin, and Crystal River in Florida. Still more nuke plants are vulnerable to being shuttered. And 2013 has seen a stream of news of coal plant closures, including the Tennessee Valley Authority’s announcement that it will shut down eight of its coal-burning generating stations in Alabama and Kentucky.

As many as 100,000 electric vehicles could end up being sold in the U.S. this year. The sleekest and sexiest among them are Tesla Model S sedans, which debuted this year, helping the Silicon Valley-based startup turn its first profit. The Model S picked up so many accolades, including the best Consumer Reports auto review of all time, that sales exploded. Contrary to media hype, there was no epidemic of the cars themselves exploding. A couple of them did catch fire, but when you smash a car into a wall or a tree, sometimes it’s going to end up in flames, regardless of which model you’re driving.

6. Obama shows he doesn’t care about the climate

While the president has talked nice about the climate and made some notable moves to help protect it, he’s still feeding America’s fossil-fuel addiction — and the world’s. Obama has presided over the biggest boom in oil and gas drilling in the U.S. in decades, and he happily brags about it, most recently at his Dec. 20 press conference. He’s gung ho about fracking. His administration continues to sell off huge public reserves of coal at rock-bottom prices. All this has led climate activist (and Grist board member) Bill McKibben to describe America under the president’s leadership as a “global-warming machine.”

7. The climate is more screwed than ever

Carbon dioxide levels in the atmosphere blew past 400 parts per million in May, well above the pre-industrial level of 280 ppm. In September, the Intergovernmental Panel on Climate Change issued its most ominous climate report yet, concluding that the international community is failing in its efforts to keep atmospheric warming below 2 degrees Celsius. We’ve already warmed the Earth by nearly 1 degree C, and climatologist James Hansen coauthored a paper this year warning that even 2 degrees C of warming would have “disastrous consequences.” Typhoon Haiyan, one of the most powerful storms in history, killed more than 6,000 people in the Philippines, striking just as climate delegates were gathering in Poland to try to thrash out a new international climate treaty. Those treaty talks didn’t go very well. And still there isn’t a single country in the world that is taking climate change seriously enough.

As oil production in North America ramped up, so did oil spills. Some 210,000 gallons of tar-sands oil gushed from a neglected pipeline into Mayflower, Ark., in March, leading to evacuations and the demolition of houses. Three times that amount of crude burst from a pipeline into a North Dakota wheat field in September, leading to the discovery that the drill-happy state had kept hundreds of smaller such spills a secret. In July, a runaway train loaded with fracked crude from North Dakota jumped the tracks and exploded in the Quebec town of Lac-Mégantic, killing 47 people, razing much of downtown, and polluting local waterways. That was by far the worst oil-by-rail accident this year, but it was definitely not the only one. And in Colorado, unprecedented flooding in fracking country triggered more than two dozen oil and chemical spills.

America’s refineries are processing growing volumes of Canadian tar-sands oil, and a dirty side effect is piles of dusty black residue left behind after the refining process. Called petroleum coke, or petcoke, this filth blows into nearby neighborhoods, coating houses and yards and angering residents. Detroit’s leaders ordered the removal of towering riverfront piles of petcoke in the summer, and Chicago’s leaders recently demanded that piles be covered up or stored indoors. The petcoke is too dirty to be burned by itself as a fuel in the U.S., but at least one power plant in Michigan is mixing small amounts of it in with coal for burning. Koch Industries has been buying up some petcoke piles and exporting them to countries with weaker air-quality laws for use as power-plant fuel. Expect to see this problem get worse in 2014 and beyond — especially if Keystone gets the OK.

Ag and food corporations followed up on their 2012 victory over proposed GMO-labeling rules in California by narrowly defeating a similar ballot measure in Washington state this year. It seems they’ve figured out the secret to winning elections: spending millions on deceptive ads. But pro-labeling efforts are still moving forward in states around the nation. In early December, Connecticut passed a GMO-labeling law that will go into effect once other states follow suit, and Vermont might do the same early in 2014. Meanwhile, Big Food is pushing its own labeling agenda: It wants to be allowed to slap a “natural” label on foods containing GMOs.

The U.S. is no longer the world’s biggest jerk on climate change. But that’s not good news for the planet — it just means other countries are even worse. Australian voters elected climate denier Tony Abbott as their new prime minister in September, and he moved quickly to roll back the country’s climate programs. Canadian Prime Minister Stephen Harper is little better, using George W. Bush–era tactics to muzzle the country’s climate scientists as he allows drillers to plunder the nation’s vast oil and gas resources. Canada had already announced that it would not meet its Kyoto Protocol commitments, and now Abbott’s new policies will ensure that Australia doesn’t meet its commitments either. The only countries with worst climate track records this year were Saudi Arabia, Kazakhstan, and Iran. Ouch.

Obama wasn’t the only prominent politician talking out of both sides of his mouth on climate change this year. Jerry Brown was a close second. The Democratic governor, a long-time climate hawk and clean-energy supporter, blamed climate change for the intense wildfires in his state this year. He signed legislation promoting solar power and cleaner cars, and teamed up with other West Coast leaders on a climate plan. Under his watch, California’s new carbon-trading program really got rolling this year, raising hundreds of millions of dollars intended for environmental programs. But he started borrowing from that fund to pay for other state programs. And — most galling to environmentalists — Brown made it clear that frackers are welcome to drill for oil in his state. He signed legislation to regulate fracking, but it was significantly watered down from earlier versions. So now the governor, once known as one of the greenest politicians in the nation, is followed around by eco-hecklers.

Six years after becoming the world’s biggest greenhouse gas polluter, China’s emissions just keep ballooning, partly a consequence of its insatiable hankering for coal. That’s very bad for the climate, and brutal for anyone forced to breathe the air in cities like Beijing and Shanghai. On the plus side, China is making some real efforts to clean up its horrendous environmental mess. This year it started carbon-trading programs in a number of cities, pledged to spend big to clean up its air, officially dumped its “growth at all costs” philosophy, and, well, this is awkward … changed federal law so that the most egregious of polluters can be sentenced to death.